There’s no better way of exploring the Catalan capital than cruising around town on two wheels. We talk to the local guides at Steel Donkeys about the benefits of bike tourism in Barcelona, before running down our top 6 tours in the city…

“Riding a bike always provides a great feeling of freedom and joy — especially when you ride along the gorgeous seaside in Barcelona, with the sun caressing your face,” says Eduard, the longest serving guide of the pioneering bicycle tour company Steel Donkeys.

“The side effects to this experience are: happiness, exhilaration and a smile that can last for days.”

Edu clearly loves his job, and it’s easy to see why. Pottering around Barcelona’s back allies on a rather nifty Italian city bike, and showing his guests the many secrets he has garnered after nearly a life time of living in the Catalan capital (impressively, it turns out, he has also lived in China and speaks good Mandarin) is not a bad way to spend your days. Especially if the sun is shining, as it is 300 days of the year in Barcelona. Even the winters are mild here on the Mediterranean, and usually dry during the day, with temperatures still climbing up to 16 degrees on average.

In recent years the city council have made a determined effort to turn their city into a kind of Amsterdam of the south.

But it’s not only the year-round balmy weather that makes cycling around Barcelona such a joy. In recent years the city council have made a determined effort to turn their city into a kind of Amsterdam of the south. In 2018 alone, they added around 50km of new bicycle lanes, and it is now estimated that 95% of citizens live within 300 metres of a cycle path.

The rather natty red and white numbers that make up the city’s Bicing bikeshare scheme are sadly off limits for tourists (you need a Bicing card to operate them, and these annual passes are available for residents only). However, there are no shortage of rental firms willing to rent you a set of wheels, while there are plenty of advantages to booking a professional bike tour led by an expert guide such as Edu.

>>> We preview 6 amazing bicycle tours of Barcelona below <<<

His local knowledge lifts what would be a lovely ride to something even more edifying, and his under-the-radar itinerary means you don’t feel like you’re contributing to mass tourism (a trend that is unfortunately beginning to blight Barcelona).

His local knowledge lifts what would be a lovely ride to something even more edifying, and his under-the-radar itinerary means you don’t feel like you’re contributing to mass tourism…

“My favourite thing to show travellers is what the real Barcelona looks like, beyond the Gaudi houses, Sagrada Familia or Las Ramblas. Places like a community garden, run entirely by the neighbours, the last and only operating wood-powered oven inside the city where they continue to roast coffee and nuts, or an open-air swimming pool for kids and families in the middle of downtown.”

‘Alternative’ is a bit of watchword at Steel Donkeys where guides are given license to develop their own itineraries and to show guests something beyond the guidebook. Indeed they claim to be one of the world’s first alternative tours, championing off the path tourism as far as 2010.

“They [our tours] are guided by people that love the city and know a great deal about it. Through us, you will easily discover some of the best most overlooked places in town: from an old brothel, to a hidden park, to the best orxata place in Barcelona,” says Edu proudly.

Another of those people is Mariana, an Argentine who has lived in Barcelona for a decade now, and has zero intention of leaving. Like Edu, she revels in uncovering the city’s lesser known lights.

“I like to show a contrast between the old and the new, the wonderful remnants of medieval and art nouveau times, and the exciting modern developments of the city. We talk about politics, history, art, society and culture. I love every stop, but it is true that I have a very deep feeling for Santa Maria del Mar.”

“We talk about politics, history, art, society and culture. I love every stop, but it is true that I have a very deep feeling for Santa Maria del Mar.”

The point about conversation is salient. Whereas most bike tours in Barcelona ride in groups of 15 to 20 people, Steel Donkeys offers a more intimate ’boutique’ experience, riding in groups of no more than 8 guests, plus guide. On average the group size is just 4 or 5 people, allowing for much more interaction between guide and guest. Their guides do not simply broadcast a prepared speech and then move on to the next stop, they converse, and being part of that conversation turns out to be a lot of fun – not just for the travellers, but for the guides too. Engaging with the travellers is part of what makes the job so appealing to Mariana: “It is very rewarding when the guests ask questions about what I am saying, and when they are well informed of any topic that we speak. It is also very nice when it is an open tour and the integration between the whole group is achieved!”

Whereas most bike tours in Barcelona ride in groups of 15 to 20 people, Steel Donkeys offers a more intimate ’boutique’ experience, riding in groups of no more than 8…

And if the conversation does run dry? Well, it seems both Edu and Mariana can reply on the simple joy of riding along the city’s stretch of urban sands on the way back to the city centre.

Steel Donkey Bike Tours run tours every day during high season (April to October), and every Tuesday, Friday and Saturday throughout winter, departing at 10am from the Gothic Quarter in the city’s Old Town.

The itinerary isn’t fixed, but typically you will see some of the Old Town, some of Eixample and modern Barcelona and return to base via the beaches and Mediterranean sea. You’ll normally stop off for a glass of orxata and a pastry, or even some light tapas (all food and drink at your own expense).

The tour last 4 hours (give or take 15 mins), and costs €35 per person. You can book online via their website.

That price includes bike rental (helmet on request) and guide, but any snacks you pay for yourself. It’s slightly more expensive than the average bike tour, but considering you’ll be cycling in a much smaller group, it’s perhaps the best value for money tour on the market.

You can also upgrade to an electric bike for a €10 surplus, and if you can’t make one of their regular departures their private tours are just €65 a person (min. 2 people), so still very affordable.

Not sure if this is the tour you’re looking for? Keep reading to discover all your two wheel options for exploring the Catalan capital…

Steel Donkeys are perhaps the hippest and well known name in town, but they certainly aren’t the only company you can saddle up with in Barcelona. Let’s countdown the top six tours in (and around) the city.

These pioneers of local, small group tourism have amazing guides and a relaxed ‘discovering the city with friends’ vibe, which has no doubt contributed to making them one of the must-do experiences in Barcelona. At just €35 per person they are very affordable for a boutique style tour (maximum 8 guests), and they also offer private tours from just €65.
www.steeldonkeybiketours.com 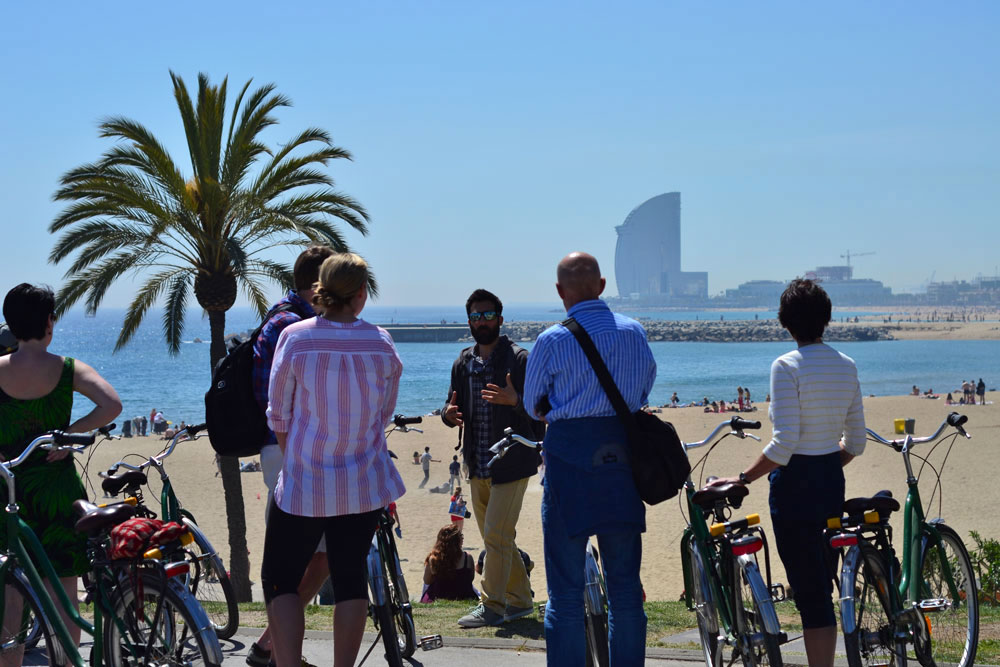 Set up by passionate photographer and traveller, Alfredo, this electric bicycle tour of the Catalan capital is one of the best-reviewed in town. Often led by Alfredo himself, the itinerary takes in the majority of the city’s top sights, like La Sagrada Familia and other of Gaudi’s greatest hits, the Gothic Quarter and the beaches. Thanks to the mobility of the e-bikes there’s also time to get up to the Olympic Village on Montjuic (this would be a difficult climb on a normal bike!). Overall the experience is a bit pricer than average, but most people feel the €65 is money well spent for this small-group tour, that takes in all the highlights. Check their website (where they sometimes offer 20% discounts!).
www.photobiketourbarcelona.com 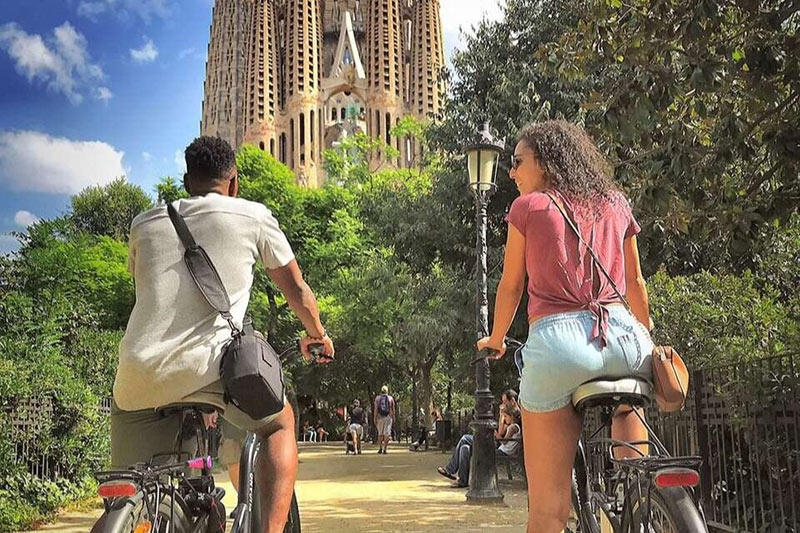 One of Europe’s most popular travel companies, Fat Tires offer a great introduction to Barcelona via their City Bike Tour that is perfect for first time visitors on a budget. As well as La Sagrada Familia, you’ll see the Gothic Cathedral and other highlights of the old town, plus take a ride to Barceloneta beach. One fun stop is the beautiful Monumental Bullfighting Arena (no longer used for the purpose, as bull-fighting is banned in Catalonia!), which is not on many other company’s itineraries. Tours cost €30, and you ride with a maximum of 15 people. Night rides also available!
www.fattiretours.com/barcelona 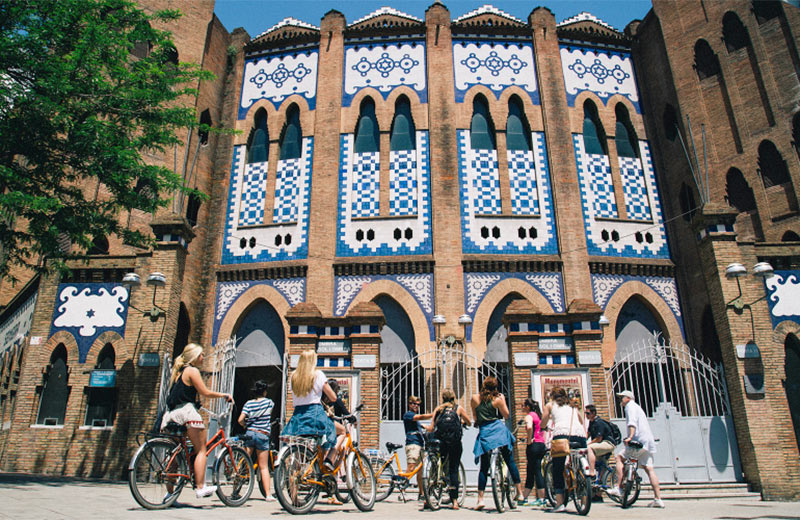 Starting all the way back in 1995, if you’re looking for a classic tour that incorporates Gaudi and many of the main sites, this is a good option, especially if you’ve never been to BCN before. Their 3-hour tour runs daily, with 15 to 20 people per guide, and costs €25.
biketoursbarcelona.com 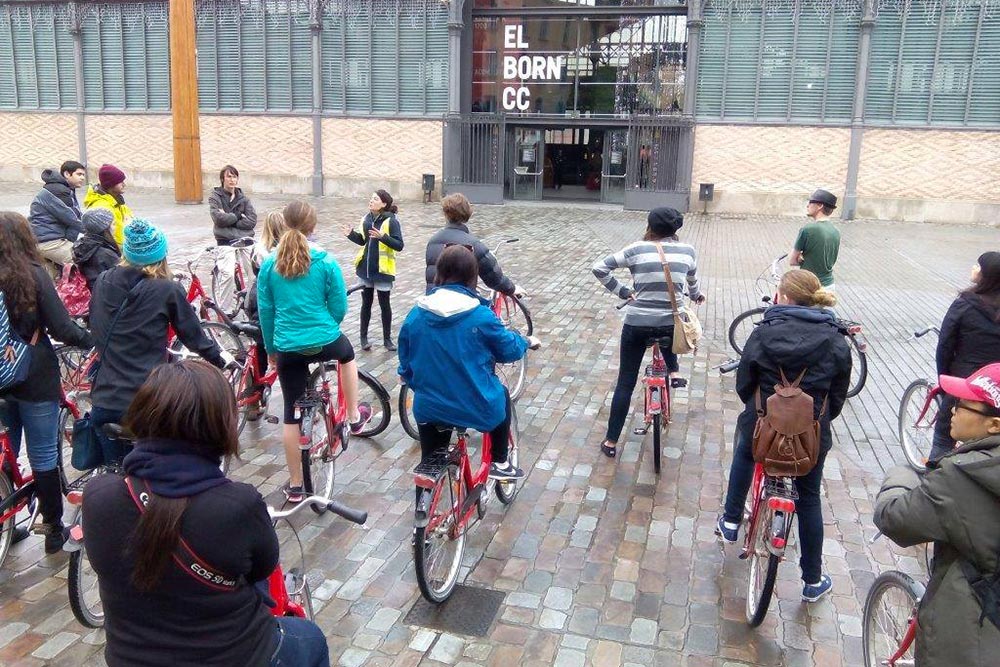 This fun and unique tour utilises not one, but three modes of transport, with your trusty electric bike joining the dots. As well as aspects of a conventional bicycle tour, you’ll also ride the famous Montjuic cable car, and take a ride on a pleasure boat around the harbour. The price is reasonable at €49.50 per person, and is available to book via Get Your Guide. 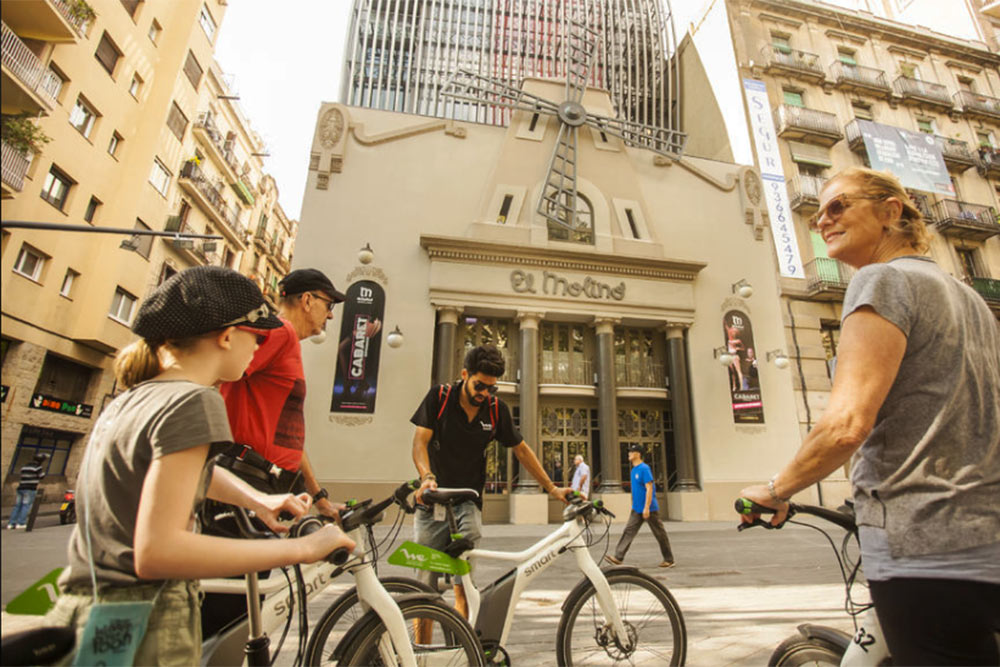 Gourmets will love this tour, that takes you, via electric bicycle, around the Bohemian district of El Borne, and finishes with a delicious wine tasting session paired with tapas. The 2.5 hour tour is done in a small group, and the price of €69 per person includes food and drink. The tour is offered via Get Your Guide. 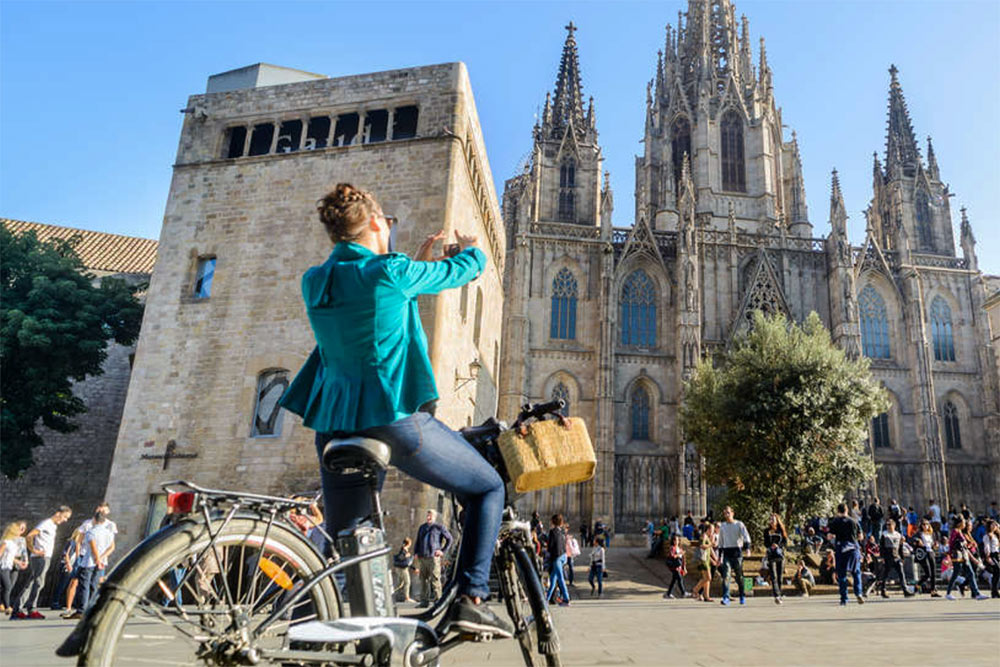 No need to restrict yourself to the city limits… take a ride up the coast to an urban vineyard!

Did you know Barcelona is surrounded by wine regions? Twelve of them to be precise, dotted all around the autonomous region of Catalonia. On this Bacchic bike ride you’ll go all the way out of town to the Alta Alella vineyard, which is about 10-12 kilometres up the coast… so a lovely ride. The ebikes (made by Mercedes Benz) make the distance easy and once you get there you’ll be treated to a tour of the vineyards and cellars, and – as you would hope – a wine tasting session is included in the price. Don’t worry about drinking too much, you’ll get a train back into town. Book via Get Your Guide. 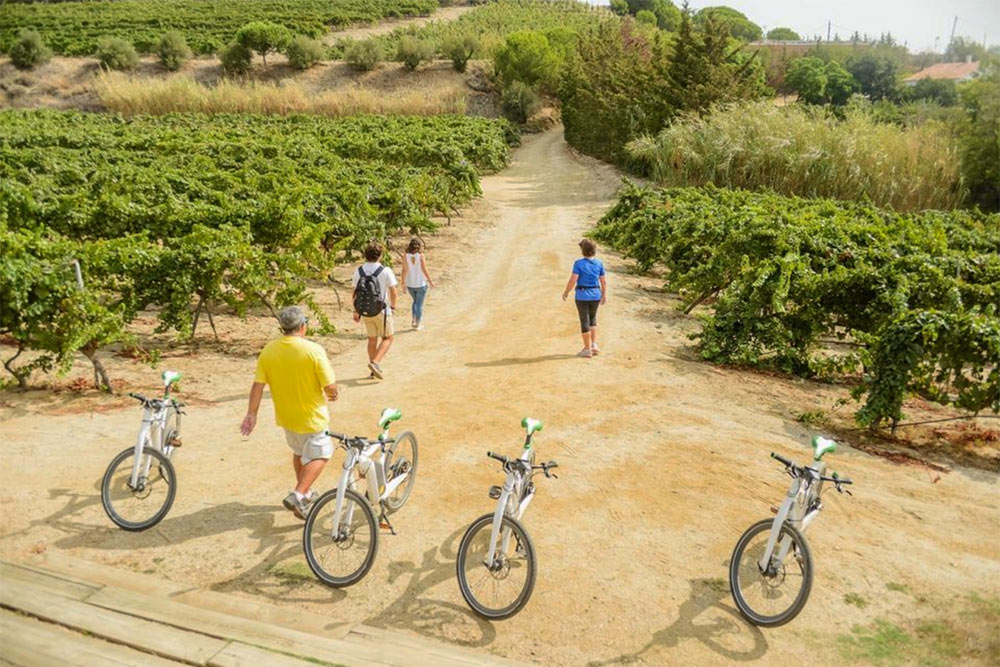 If you are coming to Catalonia, don’t forget to check out some of our other in depth travel articles on Barcelona, such as a look at the photo tour trend, our favourite Cava bars, or the best buildings designed by someone other than Gaudi. Enjoy!

Bookworm, bon vivant and bad tourist, James Sinclair is the kind of traveller that can spend 3 months in China without bothering to visit The Great Wall. A paid up subscriber to authentic travel, you can most likely find him in a dive bar east of Berlin.