In The Zone: Holešovice, Prague

Not another photo of the Astrological Clock! Lisette Allen hijacks our outdated Prague itinerary and drives us into the hip Holesovice district for a genuine taste of the Czech capital… knuckle dusters and all.

The Prague that most tourists are familiar with is gobsmackingly gorgeous. It’s Baroque cherubs and winding cobbled streets; gleaming spires and fairytale vistas; the Astrological Clock and Charles Bridge. Disneyland Prague certainly merits your attention. However, once you’ve narrowly avoided colliding with a Segway for the umpteenth time, do yourself a favour – jump on a tram and check out a slice of life in the suburbs.

Once you’ve narrowly avoided colliding with a Segway for the umpteenth time, do yourself a favour – jump on a tram and check out a slice of life in the suburbs… 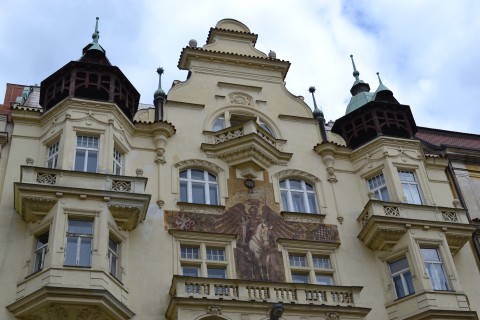 Holešovice has been my home for the past two years. It’s gritty but not grotty; up-and-coming but not yet gentrified beyond all recognition. Traditionally, it’s a working class district: every day on my way to the tram stop I walk past a plaque commemorating where the Czech Communist Party elected Klement Gottwald their leader. Although in this neighbourhood you won’t be treated to the same eye candy as in the Old Town, there are plenty of pretty Art Nouveau buildings with quirky facades as well as the odd rondo-Cubist apartment block. It’s the place to come if you want authentic Prague and fancy taking in a couple of galleries, sampling some old-school Czech pub grub then heading out for some late night hedonism. Ladies and gentlemen, welcome to the real Bohemia.

Gangs of teenage German tourists have already discovered Holešovice – or at least Holešovická Tržnice. It’s a huge indoor and outdoor market offering an eclectic range of goods, including souvenir T-shirts, knuckle dusters, Angelina Jolie beach towels and 12 inch vibrators covered in fake fur. Go figure. Should you feel peckish, the Vietnamese food stalls serve up a mean pho. It’s the farmers’ market that the locals flock here for though, especially on a Saturday. Head for Hall 22 and look out for the signs saying pěstitel: that means the trader is selling his own produce rather than cut price foreign imports. 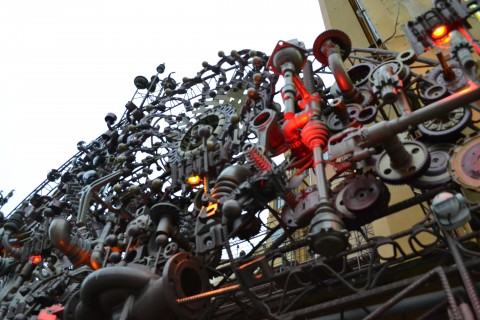 Holešovice is also home to DOX, Prague’s centre for contemporary art, which recently celebrated its fifth birthday. Think White Cube meets the Tate Modern and you’ll have conjured up a pretty accurate image of the space. The exhibitions held here are anything but orthodox: featured works have included David Černý’s infamous Entropa, the giant sculpture which ruffled feathers by depicting Germany as an autobahn in the shape of a swastika and Bulgaria as a Turkish toilet.

Veletržní Palác (Trade Fair Palace), the city’s major public modern art gallery, houses a decent collection of nineteenth- and twentieth-century art by major names (Picasso, Renoir, Gaugin, Van Gogh, Klimt) in its seven floors. The building might look underwhelming from outside but it’s a masterpiece of Functionalist architecture: the vast soaring atrium with its clean geometric lines is bound to impress even those allergic to modernism. It’s not as huge as the Louvre, but you won’t cover it all so be selective. Be prepared to be tailed by over eager gallery assistants.

Nearby café bookstore Ouky Doukey is a good place to stop off and recaffeinate. Back in the so-called Wild Nineties – the years immediately after the Velvet Revolution – this place, then known as The Globe, was Prague’s main expat haunt and hosted readings by literary luminaries such as Alan Ginsberg, Ian McEwan, Martin Amis, Susan Sontag and Julian Barnes. The café-bookshop combo concept remains, but the aspiring Kafkas have moved on. There’s still a limited selection of stuff in English to browse though. 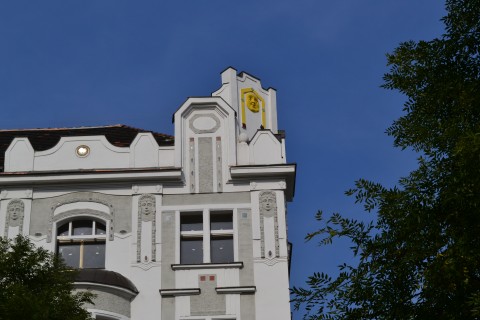 One of Holešovice’s best cafes is Coffee Beans, worth seeking out for its super friendly service, cosy Old World interior and most importantly of all, great coffee. My favourite spot for lunch is Bistro Špajz: špajz means larder and the dining space isn’t much bigger than one but that’s all part of the venue’s appeal. On the menu there’s a choice of hearty Czech soups, respectable versions of Italian classics like gnocchi and risotto along with freshly made sushi. If you don’t find a seat here, Baterka, a modern Czech pub with a self-consciously funky interior, is a decent alternative with a reasonably priced lunch menu.

Holešovice’s recent facelift is most obvious by the river, where Prague Marina, a complex of luxury apartments designed to appeal to the upwardly mobile, has sprung up on the site of a former port. Fortunately, you don’t need to be a Russian oligarch to eat out at nearby Pivovar Marina, a microbrewery pub serving up versions of hearty Czech classics like svíčková: pork sirloin with juniper berries in a creamy sauce served with – yep, you guessed it – dumplings. There’s ample outdoor seating with a view over the water which makes this a lovely spot to while away a summer evening. 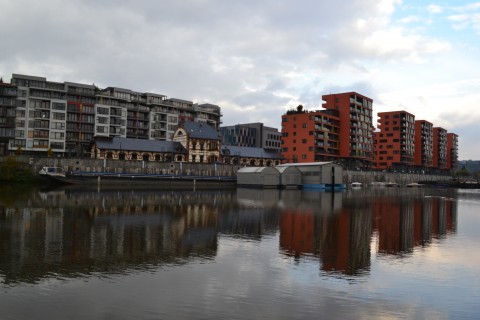 Zlatá Kovadlina (The Golden Anvil) is a bustling basement boozer that’s popular with locals but not too spit and sawdust. There’s also a bowling alley upstairs if you want to chance your arm at scoring a strike. Recently opened wine bar Biblioteca Del Vino, specialising in Italian vintages, is proof that the Czechs love the grape just as much as the grain. Despite the name, Bohemia Bagel is famed for its extensive selection of meaty burgers, although they also serve the odd bread bun with a hole in the middle.

If you’re after a hedonistic night out, there’s only one place in the ‘hood to head for: Cross Club. This nightspot with its striking industrial interior – a chaotic mishmash of bolts, cogs and pipes – is best known as a venue for drum n’ bass and all things electronic but… You’ll know you’ve made it to the right place once you spot the bizarre metal sculptures outside. On the first floor, there’s Cross Café, a pub lounge with tribal décor and a more laidback vibe (which might be something to do with all the hash being consumed, judging from the sickly smell) where I catch up with fellow local Markéta Musilová.

Markéta, 25, who studies at the University of Economics, has lived in Holešovice for three years. “What I really love about the area is that a lot of effort is being made to make it more user-friendly. There are tons of new pubs, restaurants and shops opening all the time. It’s also close to the city centre and there are some decent cycle paths so it’s easy to get out into nature. One of my favourite places is Loděnice, a part of the river where they have a kayaking slalom course. If I want a less active summer afternoon, Pivovar Holešovice’s beer garden is a nice place to chill.” 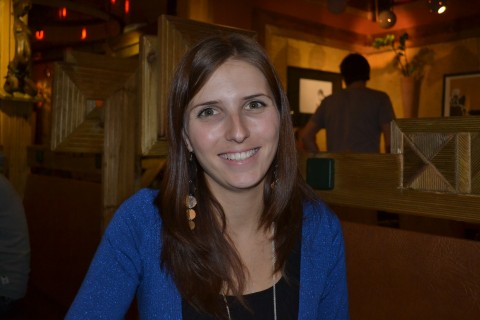 Backpackers are spoilt for choice in rough and ready Holešovice. Housed in an Art Nouveau building, Sir Toby’s Hostel certainly has kerb appeal: private rooms start from £25 a night; dorm beds from £5 a night. The hostel also hosts social events such as beer tasting and pub quizzes should you be feeling lonesome. Plus Hostel is also based in Holešovice and has a late-night bar, swimming pool and sauna. If you want something swankier, there’s the four star Hotel Belvedere which has the best (ok, the only) Japanese restaurant in the neighbourhood. Rooms start from £43 per night.

For more Prague tips check out our insider’s guide to the Czech capital right here. We’ve also compiled an article on the city’s best brew pubs, for hop lovers. And if you’re coming for Christmas then get into the spirit of things with these gorgeous photos of the Christmas markets!

2 thoughts on “In The Zone: Holešovice, Prague” 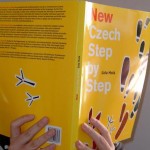 Lisette is a Prague-based freelance journalist whose work has been featured in Guardian Travel, easyJet Traveller and Wizzair Magazine. An expert on cafes, she loves nothing more than tucking into a big slice of cake in bohemian surroundings.