In his latest editorial update our Blogger in Chief tells a few tall tales from his recent travels, which have taken him from the City of Light to the 11:23 to Glasgow…

After a summer of inertia, brought about in part by the general brilliance of Barcelona during this time, I was feeling thoroughly restless by the time September rolled around. I’d seen everybody’s holiday photos on Facebook and I was jealous. I needed some fresh vistas. Luckily for me a couple of big of events were co-inciding to give me the September break I was craving. Firstly my sister was getting married just near Gleneagles in Scotland, and secondly the folk at St. Christopher’s Inns had been in contact to invite me to the grand opening party of their brand new Paris Gare du Nord hostel. And since I would already be on the road, I decided I may as well tack my annual visit to Krakow onto my itinerary, to catch up with my ziomki before the snows settle.

Here’s how it went down…

Within thirty minutes of arriving in Scotland I’d been rained on, hitched a taxi ride with a bloke called Gordon and had my ears assaulted by the Proclaimers as we raced, a bit less than 500 miles, from Glasgow Prestwick towards Gleneagles. Despite the fact my sister and her fiance/husband live in London, they’d settled on an inheritance-bustlingly lavish affair at Strathallan Castle in the beautiful, and remote, Perthshire Countryside. Whilst I would have liked to have cast a keener eye than they over the logistics of the event, this hike to the Highlands did at least give me the chance to proudly display the ancient Sinclair hunting tartan on my tie. After years of trying to hide what the ‘S’ stood for at school, this was a cathartic moment. School boys can be so cruel.

After being ceremoniously bagpiped into the folds of this Caledonian Castle, we witnessed a Scottish wedding tradition of tying of hands, ate haggis canapés and twirled each other around in the cèilidh… and, yes, we danced to the nation’s most famous ginger-haired duo, as covered by the One Night Wonders. 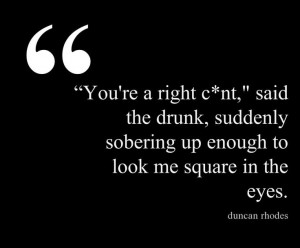 Despite the prolificacy of stereotypes I was experiencing, it wasn’t until I got on the train at Gleneagles station (a bronze award winner in the Keeping Scotland Tidy awards, no less) to catch my flight on the following day, that all of the Scottish cliches which I hold dear came to pass. No sooner had I stepped on board the 11:23am to Glasgow than an amiable drunk (one of many passengers tucking into a can of beer before noon) accosted me. “Wez you from? You wanna a tinnie? Weez’all gotta hangover. Yooz jus’ need ta man up.” After declining this kind offer of a beer with some difficulty, my new friend decided to change tack. “What about some drugs? I got poppers. Look. They’re legal aren’t they?” Whilst the legality of said drugs was never 100% established, I did mention in no uncertain terms that I definitely didn’t want any poppers. At which point things took a turn for the worse. “You’re a right cunt,” said the drunk, suddenly sobering up enough to look me square in the eyes. He held my gaze, letting me squirm for a good 30 seconds, before finally adding. “You know, I’m only joking man.”

One day we’ll live in Paris, I promise, I’m on it. The Friendly Fires were on repeat as I sped from Glasgow to the City of Light. Taking the first exit I could find from Gare Du Nord station, I was treated to a disquietening stroll around the insalubrious back streets of the 10th arrondissement before finally being able to lay my head on my hostel bed for a marathon sleep. Shaking off the fatigue of my Scottish exertions around 1pm the next day, I arose to a wet and miserable Parisien afternoon and Googled which of the capital’s museums were open on Mondays. The experienced traveller knows that Mondays = closed for many attractions, and indeed my first choice, the Orsay, was one of them… so back to Le Louvre it was, after visiting 20 years ago as a schoolboy. I had cleverly remembered to pack an umbrella (and unlike in Rotterdam, I’d even checked it was fully functioning), and so I decided to walk the distance from the hostel down to the right bank of the Seine, the idea being to catch some sights en route… but the reality being nonplussed by everything around my as my clothes gradually became stuck to my skin. After over an hour of trudging through the autumnal downpour, I arrived to find an unfeasibly large queue extending out of Le Louvre’s iconic glass pyramid. And so I was forced to wait after another thirty minutes outside before finally, with damp spirits – and socks, I was able to enter the museum.

I quickly came up with ten things I really really like about Le Louvre:

1. It is dry
2. It rarely rains
3. There are no puddles
4. Precipitation is some of the lowest in France
5. Lovely arid sensation
6. Low levels of humidity
7. The roof is top notch
8. Great dryness to moisture ratio
9. All water flow is carefully regulated via a system of cisterns, pipes and taps
10. There is some nice art work

So there you go. Le Louvre… it’s just a well-decorated rain shelter really.

Regular readers might be aware that Urban Travel Bloggers like a good party… and none more so than their fun-loving and gregarious editor. Perhaps that’s why, when the frites were down and the croissants had been counted, UTB were amongst those that got the call to attend St. Christopher’s Inn’s “Moulin Rocks” opening party for their new Gare Du Nord venue… surely the most lavish hostel launch of all time!

Hosted at sister-brand Belushi’s Bar, I’d barely been given my VIP wristband before I was quaffing champagne and testing the bar staff by ordering elaborate cocktails. I was too slow to ‘get’ the theme until I arrived, but it turns out that I was attending a Moulin Rouge / Rocky Horror Show crossover party. But if my outfit was somewhat mundane, then St. Christopher’s and Belushi’s staff in sequins, spandex, fur and fishnets more than made up for it. As for the entertainers, there were stilt walkers, trapeze artists, Burlesque dancers and plenty of live bands as the party raged across two floors. Stealing the show, visually at least, were a couple of very scary looking transvestites, dressed in period piece wigs, ripped skirts and Goth accessories, with the physiques of cage fighters. After accidentally locking eyes with one across a crowded room, I found myself smiling nervously back out of politeness… but luckily it turns out that I wasn’t ‘her’ type.

Sadly, after hitting on several more feminine partygoers it turned out I wasn’t anybody else’s type either. Well I did have an early flight tomorrow, I consoled myself…

It’s always a twisted emotional feeling going back to a favourite place, especially one that you used to live with and love so dearly. You arrive hoping it hasn’t changed at all, but then when you find it really hasn’t changed you feel you’re walking around in a dead-end town that you correctly consigned to your past. Alternatively it has changed beyond recognition, or moved on in a way you don’t approve of, and you feel completely disappointed and disconnected. A bit like running into an ex-girlfriend to find out she has given up drinking, taken up yoga and is dating a complete douchebag. You just want to get out of there as soon as possible.

Thankfully I found Krakow in 2013 a delightful mix of both the familiar and the refreshing. I could still get a plate of pierogi for less than 3 euros, the szarlotka (apple pie) at Nowa Prowincja was still delicious and there were still plenty of hot girls to exchange sexually-charged glances with at Pauza. What’s more some great new venues have opened up, none more so than Forum Przestrzenie on the banks of the Wisla. Occupying the reception area of the vast, decaying, Communist-era, Hotel Forum, this ubercool space is basically a large stripped back room fronted by a deckchair-rich riverside beach and, I’m told, has pretty much been Krakow’s number one hipster hang out all summer. I was impressed enough to visit twice during my four day stay, where I had the pleasure of catching up with fellow Urban Travel Bloggers, Anna Spysz and Thymn Chase, amongst others, with a homemade lemonade and thin-crust pizza.

Of course you don’t visit Krakow without throwing yourself headlong into the nightlife, and whether it was downing vodka, followed by practicing Wing Chun Kung Fu, at the whimsically named Pierwszy Lokal Na Stolarskiej Po Lewej Stronie Idąc od Małego Rynku whilst girls did slutty Rihanna impressions on the bar (I’m sure you can guess which wag handed them the umbrella!), or trying to save the world’s drunkest hen party from themselves at Prozak 2.0, or taking advantage of free canapés and drinks at the slightly more civilised Sacrum Profanum festival, this is still a city that knows how to have a good time… with or without me.

…And The Round Up!

Okey kokey, all this travelling left me with a bit less time to you know do my job and all that, but we’ve still managed to broadcast a few stories that I hope you’ll enjoy if you missed them first time around. I finally published my account of a visit to one of Estonia’s 1521 islands… Prangli to be precise. Yes I did go skinny dipping in the Baltic. But relax, there’s no photographic evidence (and speaking of photos do forgive the extreme blurriness of mine, caused by having the worse camera phone ever – now replaced!). Meanwhile Vince recounts the final leg of his journey “On The Road” in Asia as he is enchanted by the Taiwanese capital of Taipei, not least because he got to gorge on the best dumplings on the planet. He should be back next month with a recap of his Asia highlights and Jerry Springer-style “final thoughts”!

Other than that we’ve got two spanking new city guides published, with newcomer Mary Biles, the author of I Know A Little Place in Seville, sharing her insider secrets on the Andalusian capital with our readers, and senior contributor, Stuart Wadsworth, dishing the juice on the charming Czech town of Olomouc.

Finally, as this post is all about September stories, it would be remiss of me not to mention Andrew Matthews‘ great guest post on fun festivals around the world that take place during the year’s ninth lunar cycle, such as the Galway Oyster Festival.

Right, that’s ya lot! I’m packing my bags for TBEX… if you’re a fellow travel blogger, maybe I’ll see you in Dublin for the conference?

Oh yeah, you can now find us on Pinterest and Instagram. If you’re on them please do follow us, and we’ll try to keep cheesy travel quotes and photos of kittens to a bare minimum.