Summer In The City

Summer is the best time for travelling. But it’s also the best time for staying where you are. Especially if where you are is Barcelona. Since getting back from my last trip (to Rotterdam and Amsterdam… more on that in a bit!) in late May, there has hardly been breathing room in between this city’s seemingly endless supply of superb summer events. First there was the indie-rock extravaganza that is Primavera Sound Festival, which takes place in the concrete jungle of Parc del Forum; followed shortly by Sonar, celebrating its 20th year with a new bigger and better By Day venue at Fira Montjuic… and hot on the heels of that was Sant Joan festival – a wild celebration of bring-your-own-booze and pyrotechnics on the beach (great fun, provided you’re not hit in the eye by a firework).

And after that the Festes Majors started. What’s a Festa Major? Basically a big street party and every district of Barcelona has its own at some point between May and September (although most take place in July and August). The most famous, the Festa Major de Gracia, sees local residents dress up their streets with Blue Peter-style hand-made decorations from recycled junk, whilst local bands rock the placas and teenagers (and travel bloggers) swig sangria from €1 supermarket cartons.

In more recent years trendy new festivals such as Sala Montjuic, an outdoor cinema festival in the shadows of Barcelona’s hilltop fortress, and the now-weekly Piknic Electronik, a kid-friendly Sunday afternoon rave also on Montjuic mountain, have added more stars to Barcelona’s sparkling constellation of summer events. Whilst I haven’t even mentioned the city’s grandest fiesta, La Merce, a five day weekend of workshops, street theatre, wine tasting, live music, parades and partying, which takes place in late September. Then of course there’s the everyday summer activities of BBQs, sunbathing, swimming and beach volleyball. No wonder then I’m having trouble persuading myself to go on holiday! 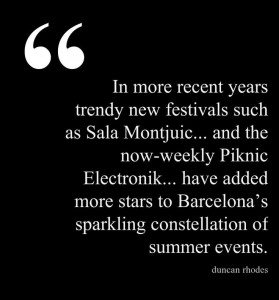 Of course part of me wants to take advantage of summer to travel to Scandinavia, to see the likes of Stockholm, Copenhagen and Helsinki whilst they’re nice and warm… or maybe head deeper into East Europe, to Romania, Bulgaria and the Ukraine, to check out the holiday vibe on the continent’s furthest frontiers. But when the Great Enchantress is showing you such a good time it’s harder to justify those epic train journeys, sleepless hostel nights and additional expenses. Especially as I’m trying to save a bit of dinero for an upcoming jaunt to Brazil and South America in 2014. Yep, for now my friends I’m officially and willingly “trapped in Barcelona”, so don’t expect too many travel stories in the editor’s column, as I’ll be cracking open another cerveza and working on my volleyball serve…

A Retrospective on Rotterdam

Right enough preamble, let’s take a look at what’s been cooking recently in the proverbial Urban Travel Blog kitchen. After attending the Travel Bloggers United conference in Rotterdam back in May of this year, it’s only natural that Europe’s biggest port is in the UTB spotlight. The city exceeded my expectations and, my appetite whetted for more juice on this surprisingly cosmopolitan destination, I asked local resident and blogger, Ina Scharun, of My Travel Madness, to pen one of our signature city guides. It’s got all the usual hot tips on everything from festivals to restaurants, so get the lowdown before you go. Meanwhile I captured my own impressions on film, so do check out this photo story on Rotterdam’s architecture for a taste of the town’s unique aesthetic.

Down In The Dungeons

When in Holland it’s pretty much imperative to call by on Amsterdam, where I’d also been invited to check out the Amsterdam Dungeons for free. The experience starts with you swinging a plastic axe at your friend’s neck and continues in much the same cheesy-but-fun vein. Amateur actors in make up and rags leap out of the shadows at you, and there’s plenty of rattling of chains and doors, as you wind your way through underground theatre sets of gory laboratories, unforgiving courtrooms, dark taverns, ship’s bellies and torture chambers. The rollercoaster at the end was genuinely scary, for me as least, as the last time I went on one (aged about 7) I bawled so much they stopped the ride. This time I was slightly more manly, just screaming a little bit, during the one short drop of the 30 second journey. Anyway not an attraction for either the cynical or the shy (numerous members of our group were publicly imprisoned, press-ganged, interrogated and burnt at the stake en route) but perfect I’d say for extroverted kids.

More exciting, from my GOT-geek point of view, was the rare chance to catch the touring Game of Thrones exhibition whilst it was in town. We queued for the best part of 2 hours in the rain for a chance to sit for 10 seconds on the Iron Throne… at which exact point my camera died!!!! Honestly you couldn’t make it up. Luckily my buddy’s iPhone was a bit more reliable. Overall, it has to be said, a huge waste of time, but kinda fun and you can check out the photos here.

That was it from this trip to the Netherlands, however for previous experiences of exploring Amsterdam’s nightlife, not to mention touring the infamous Red Light District, click on the links.

What about the rest of the Urban Travel Bloggers? They’ve been busy scribbling too… Sophie Nellis presented us with the best of Melbourne, the peripatetic Constance A. Dunn introduced another city, this time her new home of Belgrade, whilst Ben Rhodes wrapped up his Dubai adventure with some tea at the top of the Burj Khalifa. Marissa Tejada started her Spanish sojourns with a trip to Fuerteventura, and also found time to check out Madrid’s dusk ’til dawn nightlife (stay tuned for her Barcelona fashion tour!), meanwhile Vince took two steps closer to home, calling by on Singapore, before braving the Wild West of Asia – the Philippines whilst “On The Road“.

And excuse the blurry photos taken on my prehistoric camera phone, but I (finally) penned this guide to Estonia’s amazing capital, Tallinn after a great trip last year. A report of my time visiting the Estonian island of Prangli coming soon!