Escape to Fuerteventura: The Winds of Fortune

Marissa Tejada is invited to the island of Fuerteventura by Hotel Elba Palace Golf to test out their new Gourmet & Volcanic Breaks, discovering strong breezes – and cheeses – as she goes.

With its volcanic, rugged terrain surrounded by breathtaking beaches, a Spanish island located just off the coast of Saharan Africa earned the name Fuerteventura. It takes on three different meanings in Spanish: strong adventure, strong fortune and strong wind. With all that in mind, I went with high expectations.

Fuerteventura exploded to life before any of the other Canary Islands. A volcanic eruption prompted its birth as the first island of the archipelago. 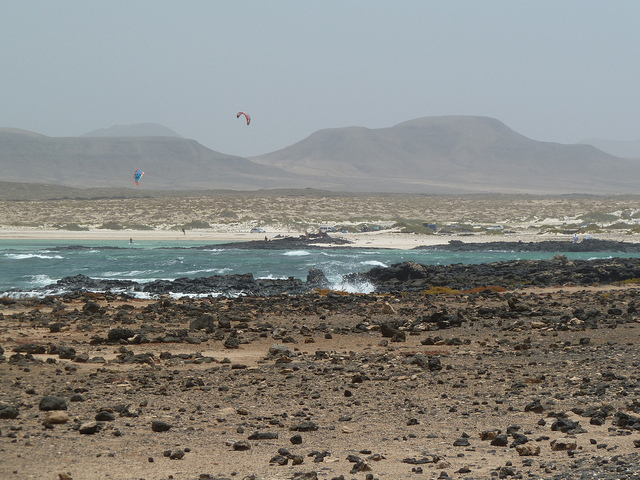 “There are no more dangers of anything exploding,” Juan José Moreno assured me with a smile. Moreno is the director of one of the top hotels on the island, the five-star Elba Palace Golf in Puerto del Rosario, where I’d been invited to stay during my visit.

The earth shaking rumblings ceased 5,000 years ago but helped to form a barren yet surprisingly diverse landscape that loyal visitors adore.

“It is a unique place. For example, when people come to stay at our hotel, 40 percent are repeat guests.” Moreno said the staff aims to offer upscale hospitality that showcases the island’s culture including its traditional products and food, a credo which provides the backbone of their Gourmet & Volcanic Breaks. “We want guests to find something typical from the Canary Islands.”

As I walked to my room, a tiny yellow bird landed directly in front of me. It chirped and hopped ahead, strangely unfazed by my humanness. I smiled thinking a canary decided to show me around his Canary Island. He wasn’t alone. His soft singing soon joined other little birds that gathered in the hotel’s grand interior Spanish courtyard where towering palm trees stretched up to a clear, bright sky. Beneath terracotta roof tiles, behind rows of mahogany wood balustrades and evenly spaced along brick colored walls, the hotel’s rooms and suites lined the elegant space.

My equally elegant room also reflected the island’s traditional architecture with a combination of dark wood balanced among warm colors. A printed welcome note directed me to sample the contents of a little ceramic bowl next to it. The white, flat, jelly-like chips turned out to be a sweet local product called aloe candy. Fuerteventura’s dry climate enables the aloe plant, known for its healing sap, to flourish. I opened the curtains and looked out beyond the balcony terrace. The green of resort’s landscape seemed to curve endlessly as the ocean waned in the distance. At that moment, a wind gust took hold of a thick palm tree’s leaves. My first hour in Fuerteventura and I had discovered the origin of one meaning to its name.

Over tens of thousands of years, occasional strong winds delivered the Sahara Desert’s sand 50 miles across the ocean to land onto the island’s shores. This repeated natural event blessed Fuerteventura with 125 miles of the best beaches in the Canary Islands.

One area is a natural wonder. Where the slopes of the bare, rust colored mountains end an impressive stretch of wind-rippled snow white sand begins and continues for miles. At Dunas de Corralejo National Park, footprint-free sand dunes stop only where the blue sea laps against them. There, I asked one local what she thought Fuerteventura’s fortune was over its neighboring islands.

“The beaches make it different than any of the other Canary Islands. Here they are such a beauty, beauty without crowds. It is beauty you can’t discover elsewhere.”

Restrained development kept Fuerteventura a fairly undiscovered destination when compared to its sister islands, including Gran Canaria and Tenerife. Fuerteventura’s first hotels, built in the 1960s, kickstarted the tourism industry. Today, a total of 100,000 residents live on the island which boasts a modern airport and several thriving towns complete with nightlife, restaurants, spas, hotels and resorts. The dry landscape connects it all and then folded and tucked into the edges of its perimeter are those unique, quiet beaches locals love and visitors come to discover: El Cotillo, Playa de Sotavento de Jandia, Costa Caleta, Cofete and Corralejo. Among them, enchanting fishing villages including Las Playitas, Puerto del Rosario, Jandía and El Cotillo, remain.

Apart from its seasonal gusts, the island experiences little rainfall. Sunny days remain the norm. It may be located on the same latitude as the Sahara desert, but the sea adjusts the climate to springtime temperatures opening up endless opportunities for other sports and excursions. 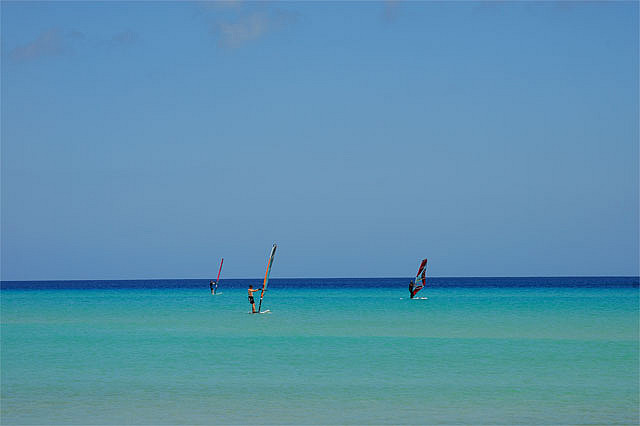 Golfers tee off year round in the center of the island.  The Fuerteventura Golf Club at the Elba Golf Palace hosted the Spanish Open in 2004.

Away from the sea and shore, Fuerteventura’s inland towns offer another perspective of island living. In the very middle of the island, the charming hamlet of Tiscamanita is known for its windmills and cultivation of aloe vera. Tefia boasts the Ecomuseo de la Alcogida, a museum that depicts rural island life. The old capital of La Oliva, minutes away from Corralejo in the north, houses a beautiful 18th century church. Betancuria attracts art and craft lovers. There, a nearby goat farm produces the island’s award-winning local cheese.

“It is just one taste of our special menu which all together is a kind of marriage of tastes from the island,” said Juan José Moreno. He explained that the Volcanic Tastes Menu, featured at hotel’s St. Andrews Restaurant, captures the island’s gastronomy through a select series of appetizers, a main dish and desserts totally unique to Fuerteventura. “The terrain created a unique farming culture that has inspired our gourmet creations.”

The island’s cuisine, like other Canary Islands, features fresh fish and seafood. One appetizer included an “octopus carpaccio with basil aroma” which consisted of thinly sliced octopus with a basil seasoning. The restaurant served a fish appetizer, “grilled Dorada with coriander foam” seasoned to perfection. 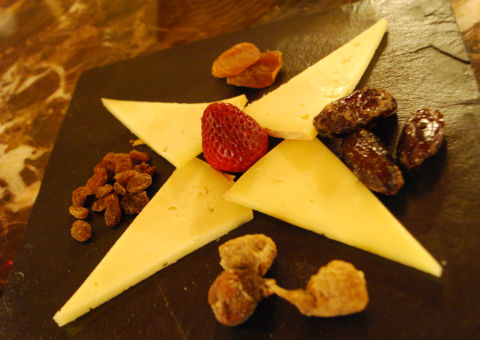 Two desserts followed including a light “Canarian pudding with caramel” and a “toasted cereals flour mousse with palm honey.”  Both sweetly completed the restaurant’s round of gourmet island tastes.

Fuerteventura earned a name that can be interpreted several ways. It makes sense because its loyal visitors and locals understand that it’s an island that can be enjoyed in several ways. The calm of peaceful moments and the opportunities for exciting adventures somehow connect to the energy of Fuerteventura’s unique volcanic history and impressive landscape.

With its sandy, sparkling shores and windy yet perfect weather, an island culture rich in natural beauty and gastronomy continues to thrive. Wind, adventure and fortune exist here. Here, the strongest of expectations can certainly be met.

Dive Down: Dive Center Corralejo – Check out their adventure diving course.
Where the Wind Blows: Ventura Surf – It’s all here: freeride, freestyle, slalom and wave. Introductory lessons and equipment rental too.
Submarine It: Subcat – Dive down 30 meters and see the underwater world without getting wet.

Fuerteventura has spring-summer weather with temps ranging from 20C in the winter up to 30C in the summer. Peak season is December to March and July-August. Car rental is highly recommended to get around. Spanish is the national language but English and German are widely spoken as well.

2 thoughts on “Escape to Fuerteventura: The Winds of Fortune”