Hard to describe, impossible to forget: Sam Howe urges us to give in to our primal instincts and join Valencia in celebrating Spain’s most spectacular festival. It always goes off with a bang…

To prepare for Las Fallas, I asked seasoned Valencians to describe what I should be bracing myself for. The first person looked down, put his hand on his forehead and muttered: “Well, it’s… urgh… just wait and see.”

It didn’t matter how many people I asked, I always seemed to get the same response. Why did the mention of Fallas (aka Las Falles in the local Valencian dialect) start making people shake like shell-shocked war veterans? Should I be scared? What could possibly happen in this festival that makes it so indescribable?

Why did the mention of Fallas start making people shake like shell-shocked war veterans? …What could possibly happen in this festival that makes it so indescribable?

What Does Fallas Mean?

The word “fallas” has its origins in the Latin word fax meaning torch, and today refers to not only the name of the festival, but also the name of the neighbourhood social clubs and the giant sculptures which these associations build. As you wander through Valencia looking at the different sculptures, hopping between street parties and barging your way through the parades, it’s clear that the Valencians have taken ‘repping your postcode’ very seriously.

What Happens During Las Fallas?

The build-up goes on for weeks, but events really start to kick off on the Tuesday with the closing ceremony of the Ninot Exhibition. A ninot is a smaller, individual papier mache sculpture that forms part of the larger falla monument. Fallas groups, equipped with brass band, banners and confetti bombs, march to the City of Arts and Science to find out which of the 700 ninots would be declared the winner. Some of the ninots included political satire, social commentary, warnings about the impact of technological advancement and discussions of national identify. This model comments on recent political turmoil with newer parties disrupting the long-standing dominance of the Partido Popular (PP) and Partido Socialista Obrero Español (PSOE).

The winning ninot in 2016 was from the fallas ‘Almirante Cadarso’ by artist Manolo Algarra. The ninot formed part of a wider piece called ‘Festum Bacchus’ which paid homage to the life cycle of wine production.

As for the 699 unworthy ninots, they are sentenced to death by fire. They have three days of life until they are paraded through the city and then set ablaze during an eye-catching event called La Cremà (the Burning) – one that takes place on the 19th March each year.

It is this aspect of the festival that seems the most puzzling. Why on earth would you burn a sculpture that has taken a year’s worth of time, energy and money? Much of this can be explained by finding out about the origins of Las Fallas, but I have my own ideas about why this tradition has continued.

The knowledge that these great 3D satirical cartoons will soon be reduced to ash truly makes you absorb and appreciate everything about them.

The sculptures are great because they tap into present national and global consciousness – not because of their aesthetic or monetary value. Next year will bring new stories, controversies and issues to discuss. Keeping the old ones would be like stock-piling last year’s newspapers. The knowledge that these great 3D satirical cartoons will soon be reduced to ash truly makes you absorb and appreciate everything about them. You know they won’t be around to enjoy later.

Appreciating the here and now cuts to the heart of what Fallas is about. At one of the daily mascletas (a terrifying, ground-shaking display of fireworks in the main Ayuntamiento square that takes place at 2pm every day), I decided to take some photos. It’s already a well voiced – yet increasingly valuable – notion, that viewing such an event through a lens can dramatically reduce your appreciation of what is going on, which was my experience. The Valencians see the mascletas as music that is to be felt and experienced as the soundwaves reverberate through your body – photos do not do the event justice and the camera should stay away.

The festival appeals to our primal instincts: to blow stuff up, to stare at things burning, to dance, to feast on meat and to stuff our face with doughy chocolatey goodness. Stalls are set up everywhere offering traditional Valencian snacks – churros (long, crispy deep-fried dough) and buñuelos (a fried dough ball made with pumpkin). 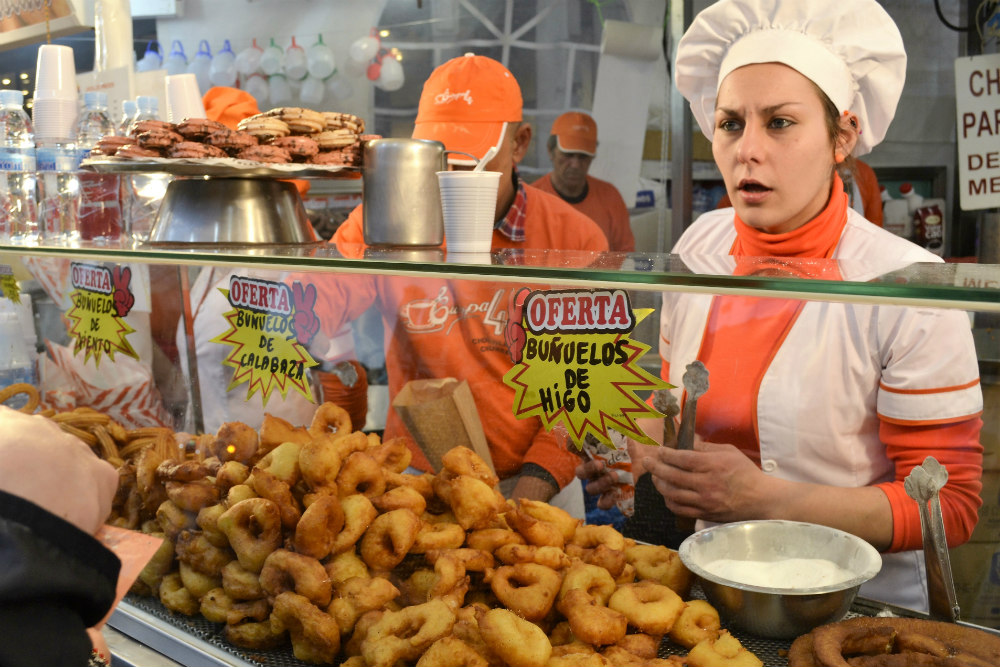 Bullfighting becomes active once more during Fallas [although isn’t technically part of the celebration… see Comments section for clarification]. Advocates, including Ernest Hemingway in his time, argue that bullfighting also taps into this primal instinct – the only place you can witness the intensity of life and death first hand. Or as I overheard one of Hemingway’s compatriots walking into the Plaza de Toros eloquently put it: “I just wanna see this bull die.” 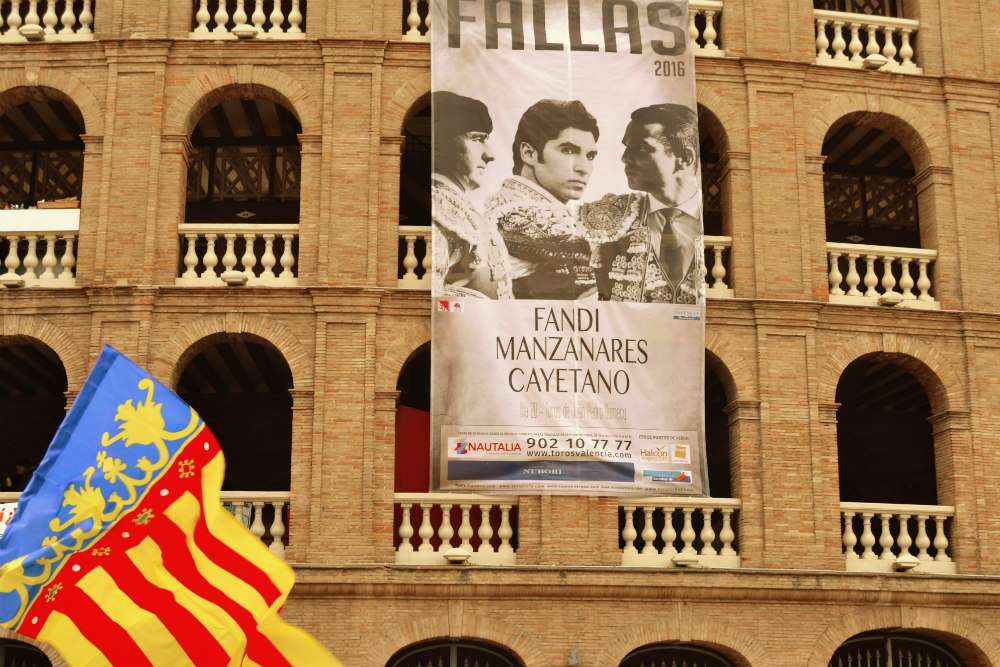 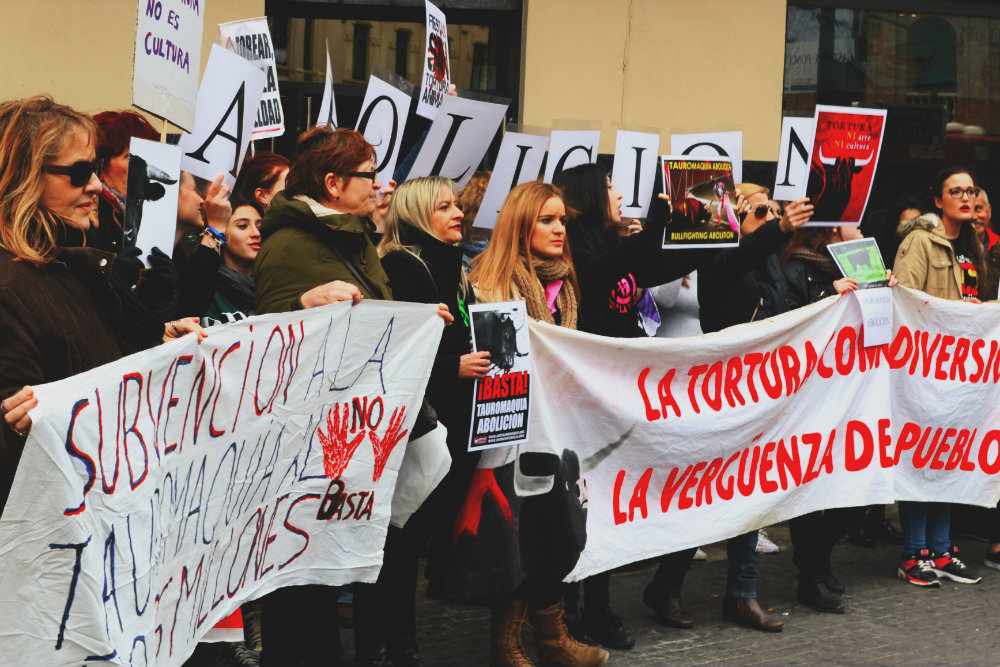 Animal rights activists aside (who usually stage a protest outside the bullfighting arena), I can’t think of many festivals that appeal to such a wide range of people. Conservatives gather to champion tradition – the sport, language, cuisine and attire of Valencia. Liberals champion progressive thinking through protest and satire. Tourists gaze in awe at the pyrotechnics on display. Spanish kids are allowed to stay up even later than normal and chug as much melted chocolate as they like. Catholics contribute spectacular flower offerings to the Virgen de los Desamparados at the city’s cathedral. Teenage boys get to impress groups of girls by throwing fireworks at them before offering swigs from their giant bottles of “Fanta”. Health and safety-drilled Britons can shake off the chains of social convention, buy a 5 euro ‘infant special’ pack of fireworks and set them off outside restaurants and cafes. Fallas is a festival that can be whatever you want it to be. It’s mischievous, chaotic, spectacular and encapsulates the joie de vivre spirit that all great celebrations should.

Teenage boys get to impress groups of girls by throwing fireworks at them before offering swigs from their giant bottles of “Fanta”.

The festival has faced some criticism due to the sheer amount of money it takes to light up the sky almost non-stop for a month, but it seems that this celebration of life, culture and identity is something that will not be compromised. It celebrates everything that’s great about being human. Just make sure you plan nothing for the day after as an intense period of silence, sleep and therapy is certainly required to offset this amount of indulgence.

Book your accommodation in advance! As you might imagine, to attend this riotous celebration you should reserve early to secure a room, or face being disappointed.

Bring earplugs. Each day at 2pm in Plaza de Ayuntamiento the aforementioned mascleta releases more than 100 kilos of gunpowder and 120 decibels of sound. Meanwhile most districts take part in La Despertà, or “the wake-up call” at around 8am. This involves fireworks and marching bands loudly heralding another day of celebrations.

Prepare to relax your standards of personal space and health and safety. Huge jostling crowds and kids letting off firecrackers under your nose are par for the course.

Dress for comfort, especially when it comes to footwear. You will be doing a lot of walking, and possibly dancing!

Book at least a day or two of recovery time before you plan on heading back to work. If you haven’t figured it out yet, the festival is one long noisy party, with little opportunity for sleep.

Arrive a couple of days beforehand, or stay after, to see the rest of the city. The City of Arts & Sciences, the Turia Gardens and the Old Town are all must-sees.

Las Falles takes place between the 15th and 19th March every year. In 2017, the 19th is a Sunday. If you’re planning on going be sure to check out our Valencia weekend guide, as well as our favourite places to eat paella in the city.

And whilst we’re on the subject of crazy fiestas why not check out our first hand reports from Pamplona’s Running of the Bulls and California’s Burning Man festival? 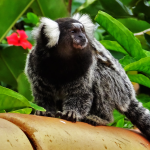 Having taught English around the world, as well as making the most of those long summer holidays, teaching has become Sam's passport to travel. Currently based in Valencia, he enjoys writing about food, sport, politics and his latest travel adventures.