Sleep with the ghosts of Roman Emperors, dine out on delicious Dalmatian cuisine, risk a shot of rakija and delve into the dungeon of Daenerys’ dragons. Duncan Rhodes shares his tips and things to do in Split.

The Imperial choice of city break, this is where Emperor Diocletian chose to retire in 305 AD, after twenty years of crushing tribes and martyring Christians. The sumptuous palace where he lived out his final years was abandoned not long after his death, and eventually squatted by refugees in the 7th Century who took advantage of the existing masonry to set up their homes and shops in the atria, chambers and basements of the erstwhile royal residence. A lot of water has flowed over the aqueduct since then, and the city limits now reach far beyond the walls of the Emperor’s palace, and include the rest of the Old Town, the iconic Riva waterfront promenade (one of Europe’s prettiest), the harbour, and Marjan hill as well as a significant suburban sprawl. It’s the charming alleyways of Diocletian’s villa though that remain the cynosure of Split, offering visitors the chance to walk in the footsteps of Roman royalty, sip a coffee next to temples of forgotten Gods, or sink a beer or rakija in the hollows of its fortified walls.

The gateway to many of Croatia’s most beautiful islands, Split is often considered a transit city, with many arriving only to board the first Jadrolinija ferry link to Hvar and co.. However Split has easily enough allure to merit a couple of day’s exploration by itself. Indeed, given the mass tourism that is suffocating Dubrovnik, Croatia’s second largest city is probably your best bet if you are planning on taking a long weekend break on the Dalmatian coast.

Wandering through Diocletian’s former palace, now the living breathing heart of Split, is the number one thing to do in the city, and highlights include the many pleasant courtyards, Roman mosaic floors, a small temple to Jupiter and the Peristil, a beautiful colonnaded atrium behind which were the Emperor’s living quarters. In an ironic twist of fate, given his penchant for persecuting Christians, the top toga’s mausoleum was converted into the Cathedral of Saint Domnius by its 7th century residents, with the city’s iconic belfry only added some five centuries later. You can climb the steep steps of the latter for panoramic views over the city and port. Also well worth visiting are the Palace’s basements. The central nave of the substructure is full of kiosks selling (tasteful) souvenirs and is free to enter, whilst a ticket allows you to explore the rest of these centuries-old storerooms, which starred in Game of Thrones as the dungeon where Daenerys chains up her dragons. In fact Split is home to several GoT locations and if you’re a fanboy/girl then you might want to check out this tour.

Split’s Old Town is approximately twice the size of the area encapsulated by Diocletian’s Palace, so take the chance to explore the rest of it fully as its narrow asymmetrical streets lead to all kinds of small treasures and subtle pleasures in the forms of churches, statues and squares. Of the latter the Prokurative is the most impressive, a three sided forum surrounded by neo-Renaissance buildings of the Venetian style. For a local flavour drop by the fish market where you can shop for the catch of the day from 6:30am (closed Sundays).

Once you’re done exploring the Old Town there’s not too much to do in the suburbs (Croatian sportsmen Hall of Fame anyone?), however you can spend a very pleasant day walking or cycling around the humungous Marjan park. Essentially a massive forested hill, you can make your way to the top for views over the nearby islands, or chill out at the beaches below. You could also opt to enjoy Marjan from the water instead: sea kayaking tours take you around the headland, stopping off for snorkelling and the chance to cliff jump off rock formations into the cool Adriatic.

Split has several cool venues for enjoying a drink in (see Drop In section), but is too small to sustain a fully fledged hipster scene (I’ll let you judge if that’s a good or bad thing!). It does have a couple of quirky, offbeat treasures though if you’re looking to escape the norm. My favourite is Froggyland, an exhibition of 21 everyday scenes from the early 20th century with 507 anthropomorphic stuffed frogs assuming the roles of humans. Created 100 years ago by Hungarian taxidermist Ference Mere, this unique collection somehow ended up in Croatia and its dozens of little details, such as an amphibious barber giving a wet shave, or a toady student hitting a fellow pupil with a ruler are both instantly recognisable and charmingly incongruous. 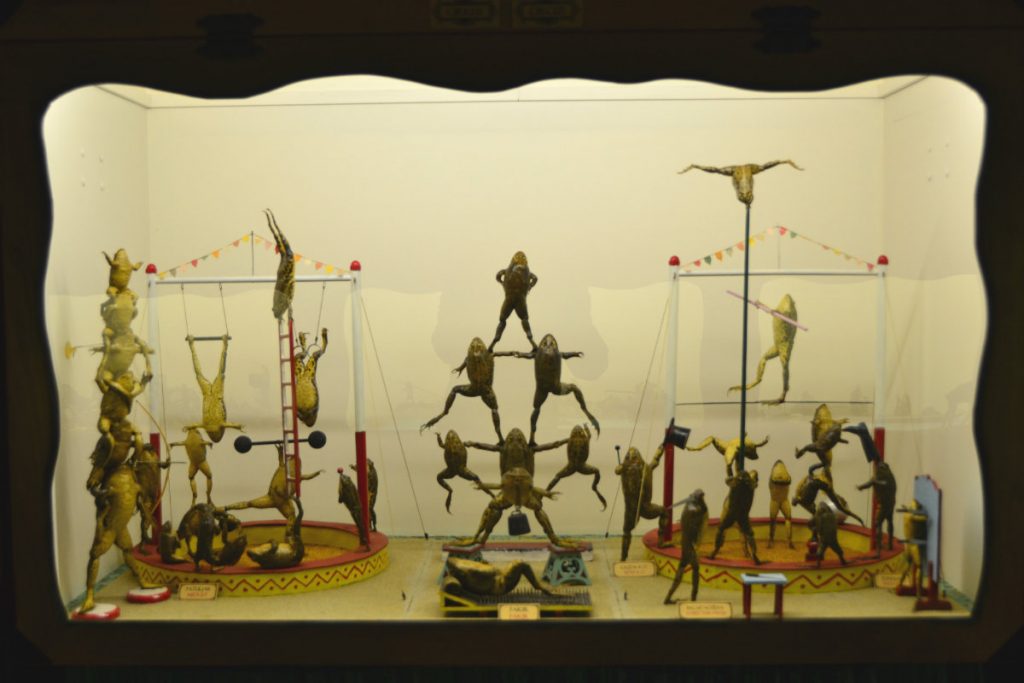 Fans of sculpture should not miss the Mestrovic Gallery, the former villa and atelier of the famous Croatian artist, which now houses over 100 pieces of his work. Find it in the foothills of the aforementioned Marjan district.

The Split Festival bring the best of Croatian pop and rock to town every July, while the Split Summer Festival (July and August) brings a more holistic spread of arts, from theatre to dance to the city’s cultural venues. September is all about film. Croatia has been the unofficial home of summer electronic music festivals in Europe for quite some time now, and Split’s contribution comes in the form of Ultra which takes place in the city’s Poljud Stadium. If you haven’t grown out of music by the likes of Tiesto, Steve Aoki and David Guetta yet then by all means check it out. The beeps and beats continues with the Split Beach Festival. For more festivities Croatia Traveller has a pretty comprehensive list here.

Experiencing the local cuisine is a great way to gain an understanding of a destination, and on Urban Adventure’s Dalmatian Wine & Dine tour you’ll sample the region’s smoked ham (prsut), Dalmatian cheese and olive oils, octopus salad, and Adriatic anchovies – as well of course the famous Zinfandel wines. Get Your Guide offer a more affordable option that includes visiting both the fish market and main food market.

Otherwise you’re spoiled for choice when it comes to day trips, and, choosing Split as your Croatian base, you can set off on tours for Plitvice Lakes, or to the even nearer Krka Waterfalls, which you can combine with a trip to Sibenik. Otherwise, if you don’t have time to travel to the nearby islands independently there are plenty of day trip options leaving from Split port, such as this ‘5 islands tour‘ that takes you to Hvar, Vis, Ravnik and Budikovac all in one day, stopping off at the legendary Blue Cave on the islet of Bisevo en route.

For an upmarket stay in the Old Town, check in at Marmont Hotel, named after the French General who spruced up the city in the 19th century. Stylish and centrally located, with all the mod cons of a 4 star accommodation, it also has a roof terrace with lovely views. For something a bit cheaper try the family run Villa Diana, a central and very comfortable 3 star stay. For a hostel that feels a bit like a boutique hotel try Dvor, whilst for a good value traveller’s hostel head to Tchaikovsky. For more options check Booking.com.

Croatian cuisine draws on Mediterranean as well as Slavic, Hungarian and Turkish traditions, and if you’re a foodie you’re unlikely to leave Split disappointed – from the delicious prsut ham (ie. prosciutto), to fresh sea food, hearty meat dishes and a love of coffee and pastries, you have everything you need to indulge. To sample classic Croatian fare look out for the “konobas“: these rustic style taverns serve it to you straight, and normally at a good price. Konoba Marjan is a good one. For something a bit more chic and modern try Zinfandel Food & Wine Bar, where superior pasta dishes and risottos are washed down with fantastic local grape juice (of the alcoholic kind). Kitchen 5 has a similarly progressive vibe for dinner, whilst for a fast and furious wrap Sexy Cow is a cult favourite.

There’s a pleasant buzz about Split come night time, and as long as you’re not expecting anything on the scale of Barcelona or Berlin, you should find several fine watering holes to lubricate the tonsils. The biggest bar in the Old Town, Fabrique, is also one of the best. With over forty beers on tap, including local craft ales, DJs spinning tunes at the weekend and a classy barebrick interior it has everything you need to have fun. For something a bit different try Aktuell, a hookah bar near the port where some of the city’s cooler kids hang out. My favourite nightspot, hands down though, is Academia Ghetto Club, a zany drinking den and historic hub of alternative culture set within the very walls of the Imperial palace. The interior is a wild mix of old furniture, tasteful junk and twisted pop art. Finally budding Bohemians should pop by Marvlvs Library Jazz Bar for literary inspired indulgence.

Split has its own airport 25 km from the city centre and – during summer at least – you can fly direct from most cities in the UK, such as London, Birmingham, Manchester, Leeds, Newcastle, Bristol and Edinburgh. Carriers include Easyjet, Monarch and Jet2. Whilst there are also connections from many more European cities, including Stockholm, Geneva, Paris, Lyon, Munich, Frankfurt, Rome and Moscow to name but a few. You can take the train or bus to the Croatian capital Zagreb: both take around 6 hours, whilst Dubrovnik is also around 5 hours away (bus only). You are of course at the gateway to Croatia’s wonderful and diverse archipelago of islands. Click the link to read Stuart Wadsworth’s report on them. Jadrolinija is the main ferry operator.

Naturally the usual suspects – Tripadvisor, Lonely Planet, Timeout – all have plenty to say about Split. Other local sources of information include Frank About Croatia and the official tourist website: Visitsplit.com

Black Lamb and Grey Falcon, an account of Rebecca West’s exploration of the Balkans in the 1930s is considered one of the 20th century’s greatest travel books (even if the author is accused of being overly sympathetic to the Serbs!), whilst you can find many more modern accounts of the region’s tumultuous history in both fictional and non-fictional form: The Hired Man by Aminatta Forna is one of the more highly rated ones. For a Croatian classic try On the Edge of Reason by Miroslav Krleža.

Split is of course the scene of several Game of Thrones scenes, all set in Mereen, and you can in fact take a walking tour of all of them with Urban Adventures.

Enjoyed this guide? Well the good news is we’ve got insider guides to virtually all of Europe’s best cities, and we continue to publish new guides and stories every month. Subscribe to our newsletter to stay in touch!