A Traveller’s Guide To Street Art In Berlin

Naturally a hipster haven like Berlin has an abundance of epic street art for the visitor to track down and admire. With the help of Bupa Travel Insurance we take a look at the scene, district by district…

Berlin has always been a magnet for alternative cultures, and as often happens in times of repression, street art was used as a form of protest. Not long after the Soviet Union built the wall that divided the city in 1961, graffiti sprung up along the surface that faced west. East Berlin’s inaccessible side remained blank, however, until after the toppling of both its regime and the wall in 1989. Thierry Noir was famous for his creations along the “death strip”, and he painted on its eastern side as people hammered through it. 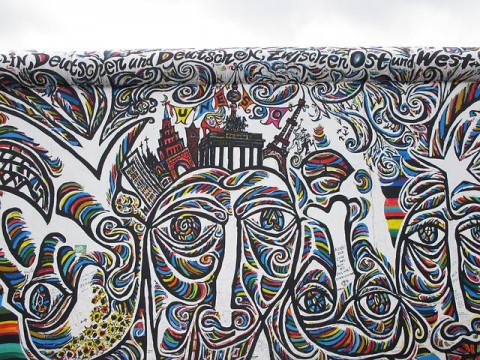 For a different take on the German capital, book your hotel and flight, and sort out your travel insurance; once you’ve settled in, head for Mitte.

This city-centre district is on the tourist trail, but visitors don’t only come for the well-known sights. The area’s café culture has long attracted artists, and once housed many squats. The best known was Tacheles (meaning straight talking in English), originally a department store, whose heavily-coated exterior still documents years of occupation. Nearby, street art runs the length of the alley off Rosenthaler Straße, where works include some by Britain’s own Banksy.

Kreuzberg has left behind its reputation as one of the tougher districts, and has re-invented itself, but without selling out completely. Nowadays, this bohemian quarter is a diverse blend of ethnic groups, where edginess is restricted to anti-police slogans that hark back to historical riots. Among the murals, look for Victor Ash’s huge Kreuzberg Spaceman, said to be the world’s largest stencil.

Close to Kreuzberg, this is another mishmash of communities, art and fashion. Here, you will find outsize offerings by Blu, renowned for thinking big. A giant figure, composed of myriad little bodies and a global warming sand timer, towers over the passing crowds, delivering the artist’s political message to the people of Berlin, and beyond.

Cross the bridge for the East Side Gallery, where street artists and ordinary Berliners have left their impressions and expressed their emotions on the wall, making their individual points about the repression of the past, the freedom that followed, and the changes and challenges that it brings.

Not far away, the art of Raveler Strasse 99 manifests itself differently. Here, you will need to search clubs and derelict buildings, where graffiti has returned to its original underground concept.

Take in all that this lively city has to offer, and enjoy all the works mentioned above, plus El Bocho’s Little Lucy and cat, Xoooox stencils, and Jimmy C’s drip paint. Explore alternative Berlin, marvel at its street art, and at the culture that has once more developed in a confident and united Berlin.