One Day in Montreal

How to spend one fine day in Montreal? Sonia Frieder, specialist itinerary planner and founder of Sonar Travel, is here to share her expertise.

Headed to Montreal for the second year in a row to attend the Canadian Formula 1 Grand Prix, I was determined to see more of the city then just the Gilles Villeneuve racing circuit. I only had one day available for sightseeing, so I strategically plotted my course through Montreal. To my amazement, I managed to hit all 9 attractions on my itinerary and still had time to gorge on poutine… twice. So what can you do with one day in Montreal? If you are up for the challenge, here’s what your day in Montreal could look like. 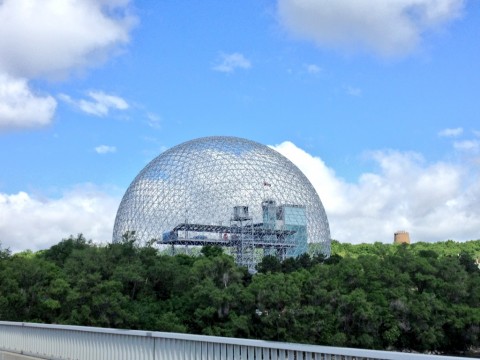 Saint Joseph’s Oratory
I started off my journey by visiting Saint Joseph’s Oratory. I was surprised to find it perched on a hillside along a very modern street scene. The surprises continued as I made my way inside. Before encountering colorful stained glass windows or intricately carved murals, I was faced with several escalators, corridors, and lobbies. Let’s be honest, most of the cathedrals targeted by travelers tend to function more as tourist attractions than places of worship. This cathedral was clearly the latter and was designed for crowds of worshippers, not tourists. I quietly made my way through the church and stopped to enjoy the views before dashing off to my next location.

The Montreal Tower
I drove to the other side of town to visit the Olympic Park which houses The Rio Tinto Alcan Planetarium, The Biodome, The Montreal Tower, The Insectarium and Botanical Garden. The Montreal Tower is the tallest inclined tower in the world standing at a bendy 45-degree angle and 574 feet (or 175 meters). The ride up the elevator felt like I was moving through a spaceship. Visitors enter the capsule and slowly start to climb. Then it goes dark, you can’t see a thing, but moments later you escape and are rewarded with fantastic views of Montreal. Once on the observation deck, like all observation decks, there is not much to do besides take in the fantastic views.

The Biodome
Next up, the Biodome! No, I’m not talking about Pauly Shore’s outlandish 90’s film. The Biodome in Montreal is an indoor zoo. It was originally built as a velodrome for the Olympics and is now home to four ecosystems and thousands of animals. You can feel the environmental differences immediately upon entering each zone. The best part of the Biodome, in my opinion, is the penguin exhibit. I don’t think I have ever been so close to a penguin before; they are huge! You can sit alongside the glass pool, watch them swim, bob up and down through the water, and take some amazing selfies! 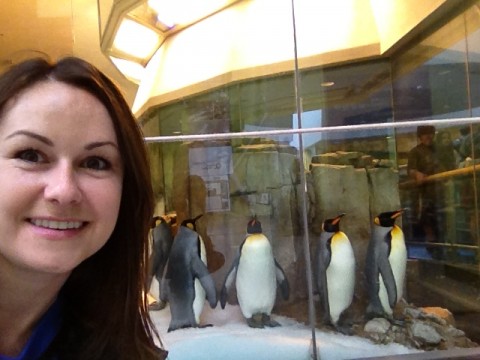 The Rio Tinto Alcan Planetarium
Next, I headed over to the The Rio Tinto Alcan Planetarium. I grabbed a ticket for a show starting in 10 minutes, giving me just enough time to walk through the exhibits. Once inside the planetarium I was greeted by bean bag chairs! That’s right, bean bags! I settled into their squishy goodness and was blasted on a journey through the tiniest elements and the grandest galaxies. I left feeling in awe of the universe, so big, and so small all at the same time.

Mont Royal
Feeling thoroughly educated in space and zoology, I made my way to Mont Royal. Prepare for your mind to be blown: Montreal is named after Mont Royal! This is a popular spot for outdoor activities such as hiking, biking, and ice skating. But honestly, I just wanted to see the views and I was not disappointed! There a several turn offs on the road where you can park and snap photos of the city below.

The Montreal Museum of Fine Arts
You’d think I would have had enough at this point, but I kept on. The next stop was The Montreal Museum of Fine Arts. This museum is one of the most confusing I have ever visited. It is housed partially underground and in several different buildings, making it a challenge to navigate. However, I must give them credit for not charging admission. That’s right, the museum is completely free to the public.

Notre Dame Basilica
I finally ditched my car and hopped on the subway to head out for the night. When I exited the station I found myself in front of the Notre Dame Basilica so I decided to stray from my original itinerary and pop in. Although the name conjures up images of THE Notre Dame in Paris, this one is not quite as impressive, but still held its own. The cathedral is small but filled to the brim with colorful and intricate stained glass, winding wooden staircases and shimmering shrines. It is located around the block from Old Montreal, which was my next stop. 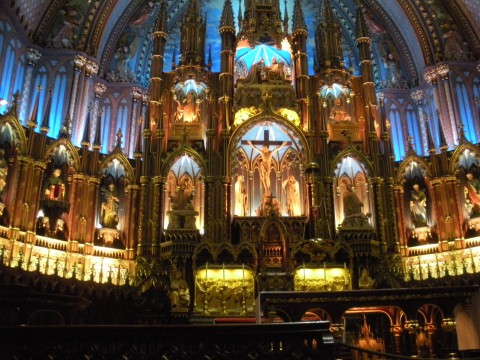 Old Montreal
One of the things I love most about Montreal is that is feels very European. It’s not as good as actually visiting France but it sure makes you feel like you’ve entered a land far more exotic than just Canada. Most of Montreal is very metropolitan but Old Montreal, as the name might suggest, looks and feels like a quaint, old village. Only spanning a few blocks in either direction, shops, pubs, and restaurants line the cobble stone streets and poutine is available around every corner.

Rue Crescent
The final stop on my Montreal escapade was a visit to Rue Crescent. There is no shortage of nightlife in Montreal and there are many popular streets lined with clubs, bars, and restaurants. Many will argue that Rue Crescent is not the liveliest spot. However, during Grand Prix weekend, it’s the place to be. The city shuts down several blocks and the streets are lined with vendors, booths, awesome cars, bars, and entertainment.

My one day in Montreal was a doozy! Sure, I didn’t get to spend as much time I might have liked at each location, but I’m glad I did it. Next year, I’ll know exactly what I want to visit again, what I can skip, how to get there, and where to find the best poutine! (That would have to be the Foie Gras Poutine at Au Pied De Cochon!).

Like this post but hate planning the details of your vacation? Let Sonia from Sonar Travel help! Sonar Travel creates detailed, customized vacation itineraries saving you from hours of scouring the internet. We take all the guess work out and tell you exactly which attractions to visit, how to get there, where to purchase tickets, when the best to go is, and more! We do all the heavy lifting and plan the perfect vacation just for you.