On a grey autumnal Sunday in Athens, The Editor takes his camera for a walk around the offbeat Gazi district… check out our latest photo story on Urban Travel Blog.

Hornets, bees, beggars and mad dogs are just a few of the things one has to contend with on a walk around Athens’ rough-and-ready Gazi district. The area is dominated by the rotund and rusting steel infrastructure of the former gas works along with its trapezoid red-brick chimneys, that rise tall and narrow towards – today at least – a grey and gloomy sky. These industrial features are very much souvenirs of the past however, as Gazi’s days fuelling the city’s economy are long over. Today the district is a nightlife and culture centre, fuelling the capital on ouzo and art. The gas works have been reincarnated as “Technopolis“, which is now one of the city’s biggest cultural attractions, whilst the surrounding area is literally choc-a-block with bars… they exist one after another, without interruption, around the scruffy public space that opens as you alight at Kerameikos metro.

Hornets, bees, beggars and mad dogs are just a few of the things one has to contend with on a walk around Athens’ rough-and-ready Gazi district.

Perhaps our Athenian correspondent Marissa Tejada would disagree (you can read her take on the district right here), but if Gazi was once hip it isn’t any more. Despite the abundance of bars, there is hardly anyone about, and those that are here appear to be muscle-bound motorbike owners rather than poetic, beard-stroking, coffee-sipping types leafing through a dog-eared copy of Plato’s Symposium. However, artistically speaking, the area still has lots of appeal for lovers of street art, whilst the mix of pasted-up posters, orange trees and pretty-petalled flowers add plenty of colour to the facades of the worn-and-torn buildings and give my lens plenty to contemplate. (Update: Marissa tells me I should come back on a summer evening to revise my judgement!).

Having wondered around the sidestreets, made friends with one of the less rabid dogs, and given 50 cents to a monolingual mendicant, I decided to walk up the side of the walled-off gasworks (Technopolis was closed for the day). The sun was going down behind a nebulous patchwork of grey and so, from behind some iron railings, I took one more shot of the chimneys – one that looked like it could have been taken in 19th Century Northern England. Then I saw that across the road were some fenced-off ruins, of what might have been a remote corner of the ancient agora. Peering closer and I found that the olive and fir trees made way opening up a fantastic view of the ever-glorious Parthenon. I guess I was in Athens after all. 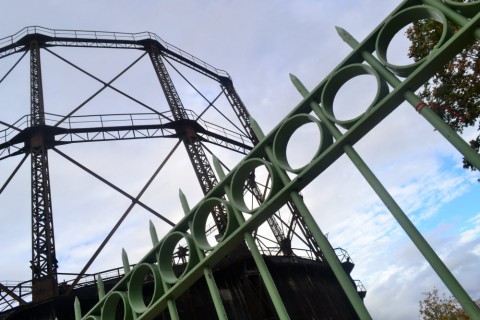 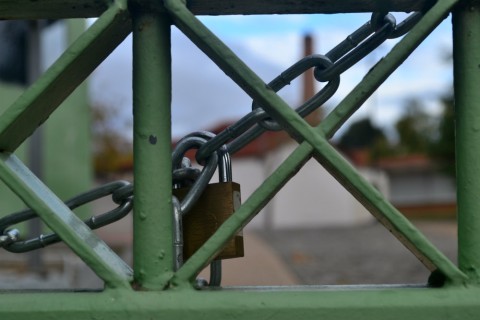 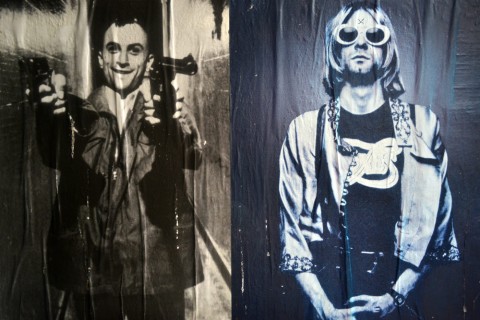 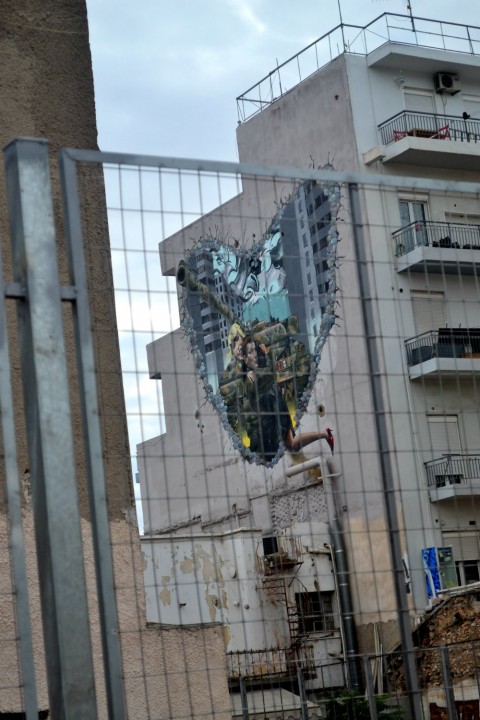 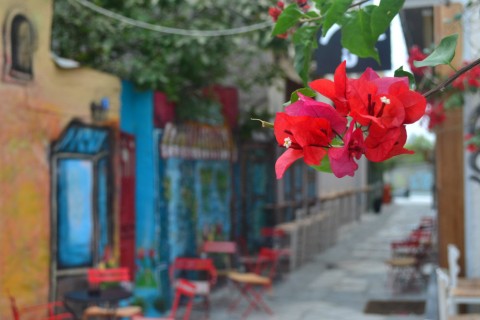 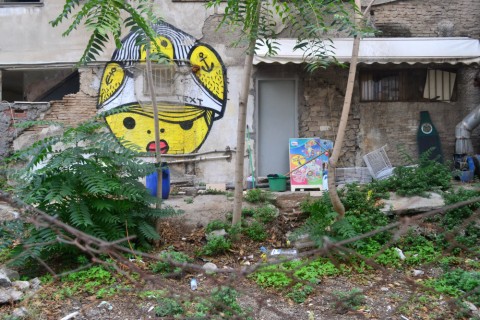 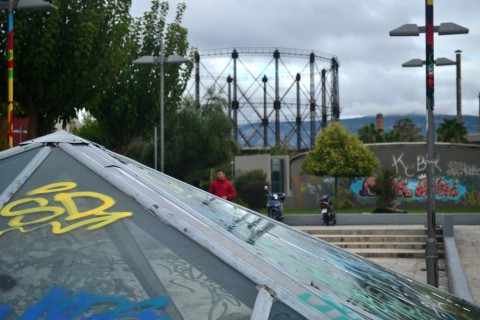 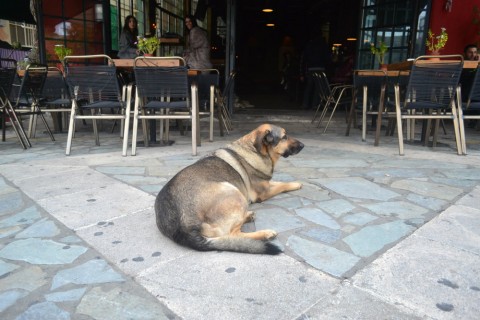 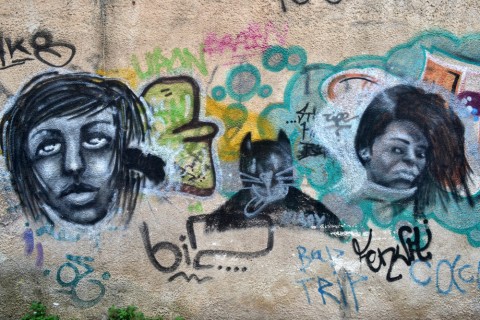 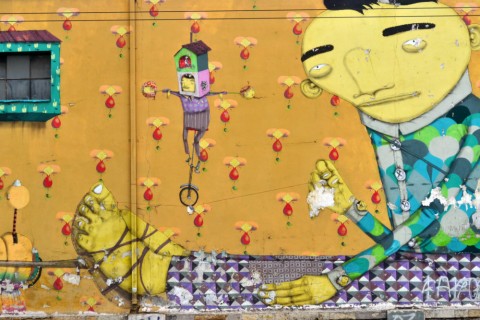 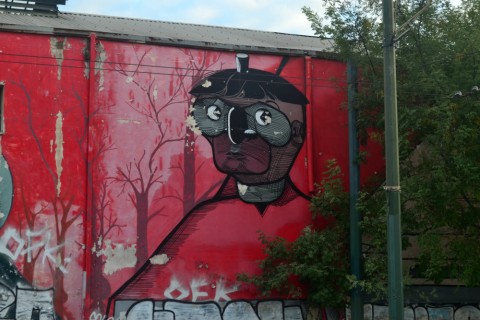 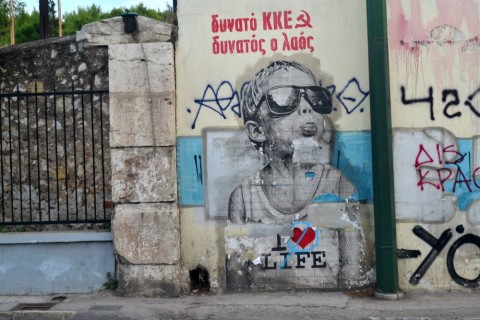 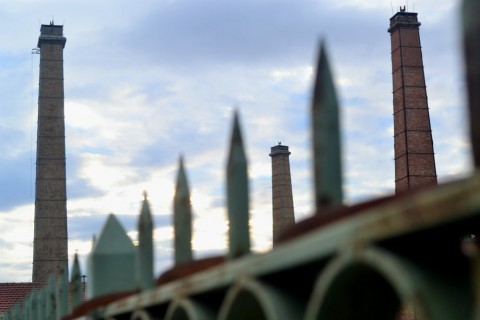 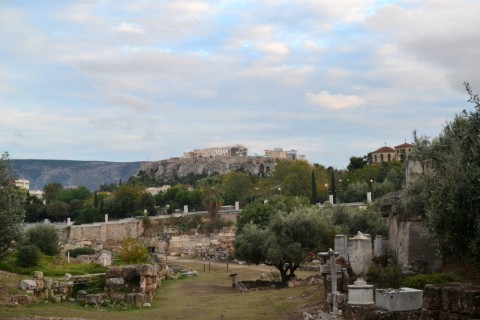 …and if you’re heading to Athens for a city break, check out our very own weekend guide right here.

One thought on “Photo Story: Gloomy Sunday in Gazi”