Cocullo is a small village in the central Italian region of Abruzzo, hidden deep in the Apennines. For most of the year it is a village like many others, but on May 1st it celebrates one of Italy’s most bizarre festivals: la Processione dei Serpari, the Snake Catchers’ Procession – the product of a combination of pagan rites, superstition and Catholicism. The celebration dates back to over 3000 years ago, when the area was home to the Marsi people, who worshipped their goddess Angizia with offerings of live serpents. After Roman conquest, the custom was adapted to honour Apollo. When Christianity reached the area it was sanctified and dedicated to St. Domenico, who was believed to have the power of healing snakebites. Every year on May 1st, St. Domenico’s day, the statue of the saint is paraded around the village, adorned with masses of writhing reptiles.

The serpents are caught in the mountains and woods around Cocullo, and released in exactly the same spot after the festival. “They are creatures of habit,” says a young woman, with a mammarella, a thin apple-green snake, coiled around her arm. Four types of snakes take part in the celebration; the most popular by far is cervone, the four-lined tree snake, which can reach up to two meters in length.

I am standing next to a toddler playing with a mammarella, while his father is trying to keep two biacco snakes, the most aggressive, from chewing each other’s heads off.

On the day, the village square is packed hours before the procession is due to start at noon. Bands play traditional music, tourists and locals jostle for the best viewing spots; but, notwithstanding the crowds, snakes still outnumber humans at least three to one. I am standing next to a toddler playing with a mammarella, while his father is trying to keep two biacco snakes, the most aggressive, from chewing each other’s heads off. At twelve the bells ring and St. Domenico’s statue is carried out. I join the locals elbowing their way to place their reptiles on the statue. The snakes are forbidden from entering the church. Catholic lore claims they are a symbol of evil, yet they are celebrated and paraded with the Saint. Alongside the Saint, snakes become a totem; an allegory of what is supernatural, feared and revered at the same time. The snakes slide up and down the Saint’s legs, curl around his halo, over his face. The parade circles the village three times, finishes back at the Church. The Saint is barely visible, hidden beneath the throbbing mass.

Visitor Info: Cocullo can be reached by train from Roma Tiburtina. There are extra trains on May 1st, check Trenitalia for details. There are no hotels in Cocullo, but villagers sometimes rent spare rooms and flats for as little as €20 per person. Call the Pro Loco (Tourist Information) on +39 0864 49117. 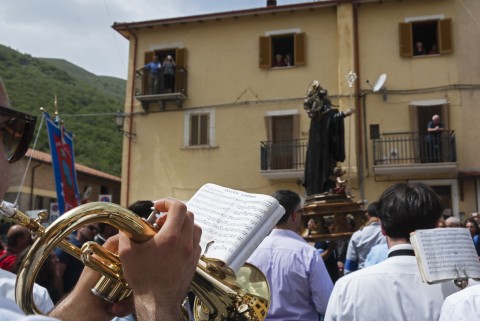 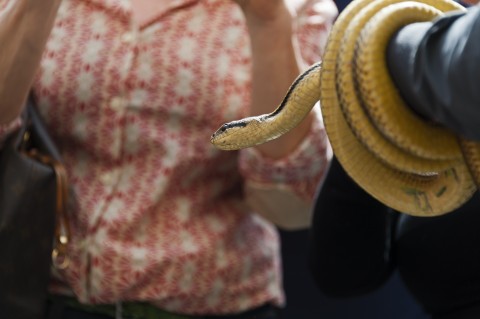 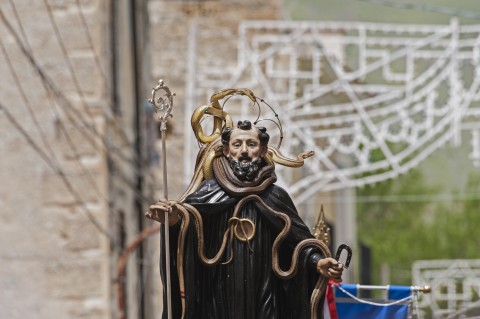 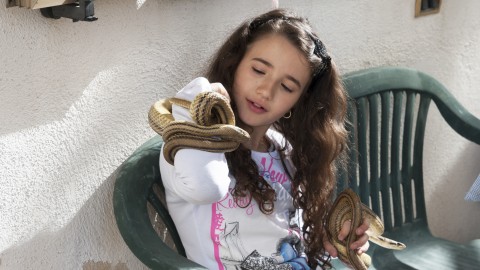 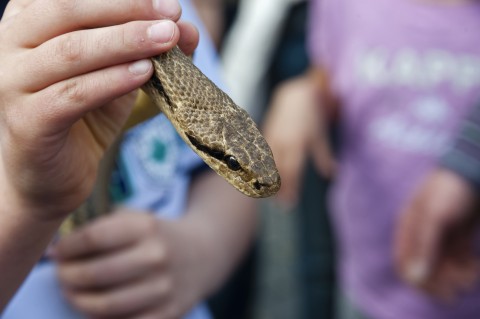 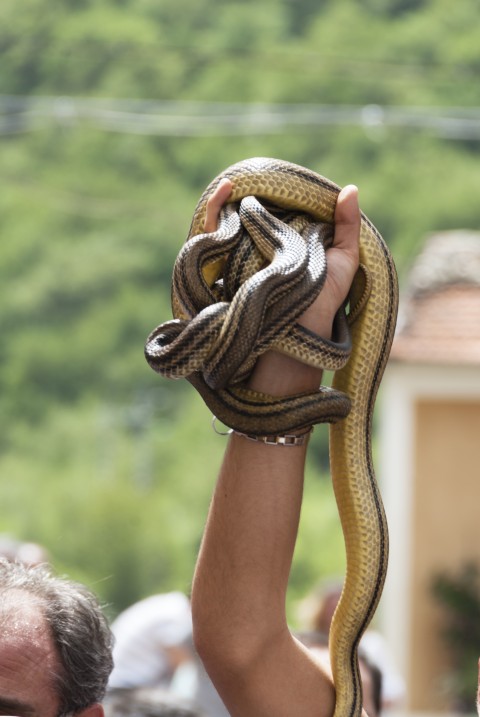 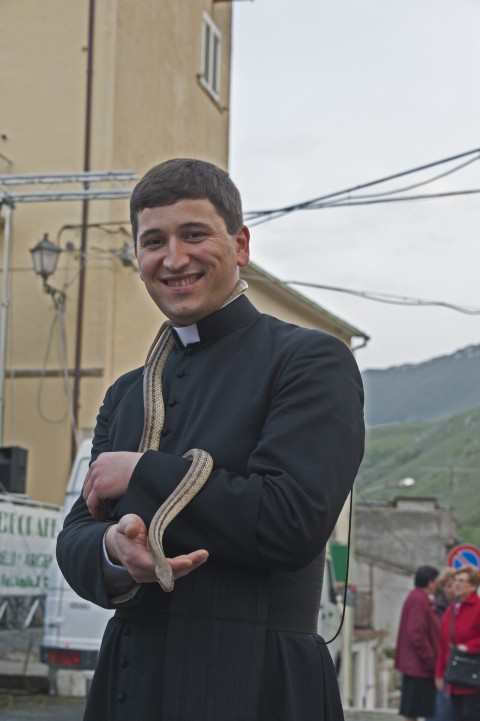 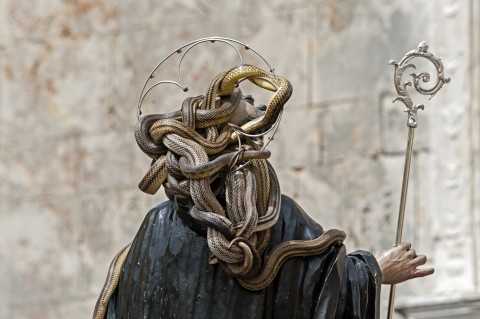 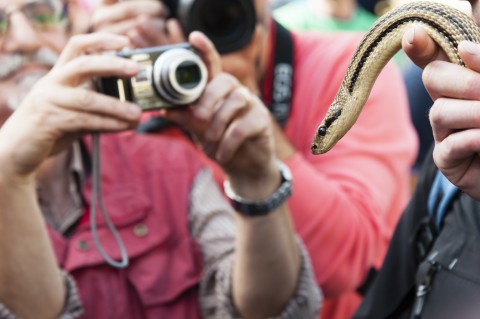 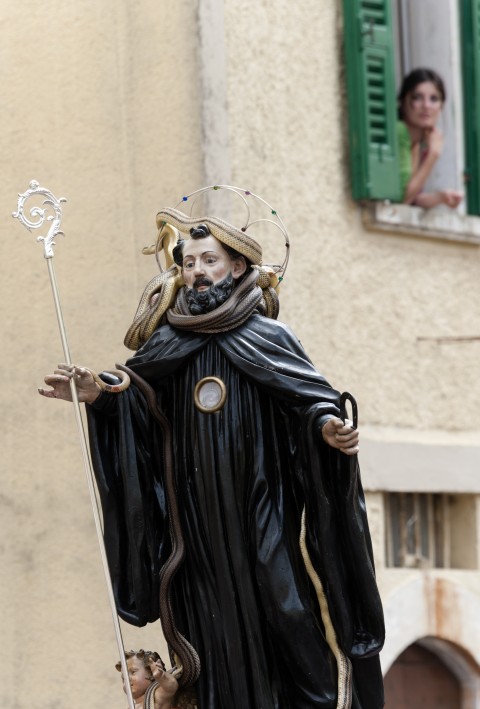 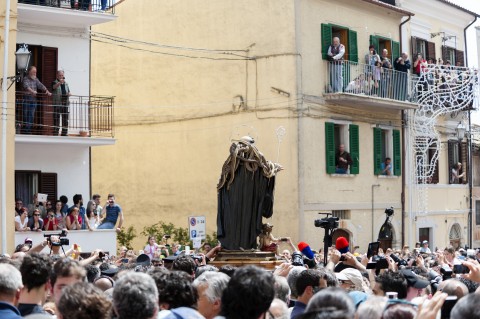 Crowded Planet are travel blogging duo Margherita Ragg and Nick Burns, an Italian / Australian couple based in Milan, who travel the world reporting on culture, nature and adventure.