Virtually every city in Poland boasts a stunning market square, but arguably the fairest of all them all is Wroclaw’s very own Rynek. Jorg Dietrich shares his panaramic photos and some of the Germanic history behind this iconic square.

Wroclaw has been a city in focus throughout 2016, as a European Capital of Culture. Any visitor to the city will have walked around the Rynek, the town’s main square, which was known as the Grosse Ring (Great Ring) in German times. That old name reflects what makes this huge square unique – there is a complete block of buildings and alleys in its centre, which include the Town Hall – and the square, with its grand facades, surrounds this block like a large ring. This layout makes for a great walk, as the visitor is constantly discovering new perspectives at every corner. These perspectives are never more joyful than in summer, when, with it countless terraces and patios, the entire square effectively becomes one large outdoor restaurant and bar area. 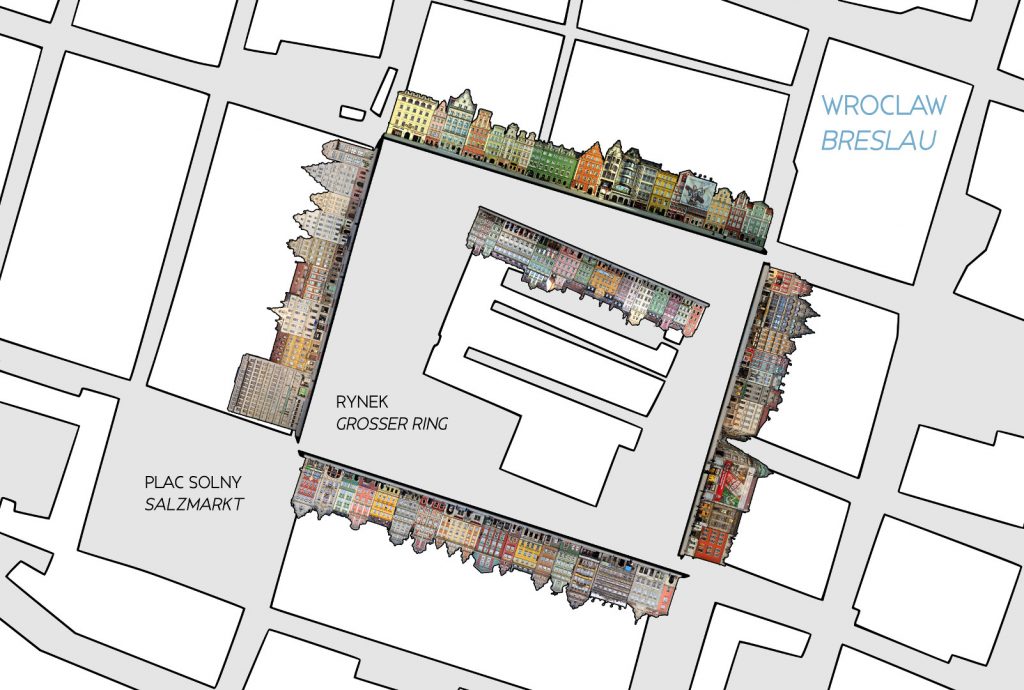 Given Wroclaw’s complicated history, there is more to the Rynek than meets the eye. Indeed the square looked very different in the 1920s, when it was still the Prussian city of Breslau, and later when the city was declared Festung Breslau (Fortress Breslau) by the Nazis towards the end of WWII, this resulted in the destruction of most of the city centre, including its main square. Only a few buildings in either the Historicism or Art Nouveau style survived. After the city became Polish again, it was decided to rebuild the whole area around the Rynek, not in its previous glory but in a style resembling the Classical and Baroque facades that lined the square around 1800. Basically all of the colourful Classicism style buildings you see today are restorations in that sense.

Let’s take a walk around the square starting with its west side. That side is called the Seven-Electors-Side (german: Sieben-Kurfürsten-Seite | pol. Stroną Siedmiu Elektorów) or the parade square and is probably the most prominent side with the oldest preserved facades. It is named after No. 8, the yellow building with elaborate paintings. Also famous is No. 2 Unter Greifen (eng: Below The Griffins | pol. Pod Gryfami ) which is the largest patrician house on the Rynek. An infamous building is the large bank building on the left, the only modern structure on the square and unsurprisingly a highly controversial one at that. On the far right end of that side we see St. Elisabeth church, standing beside one corner of the Rynek and offering the best view of the square from the top. 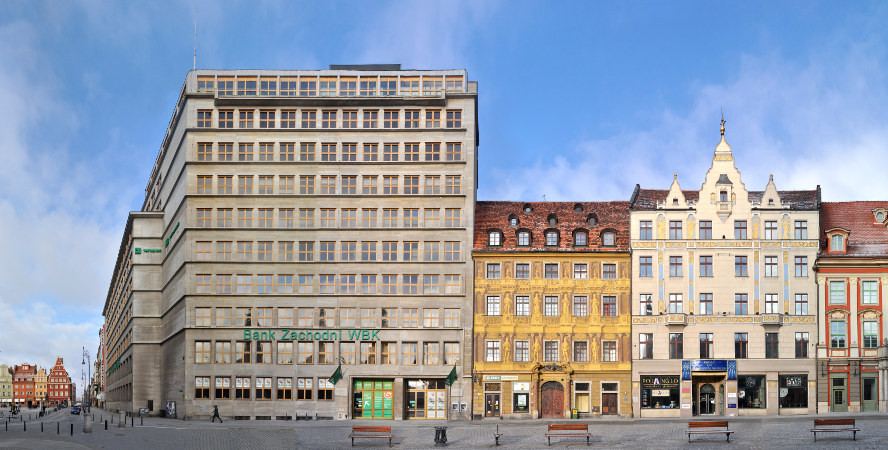 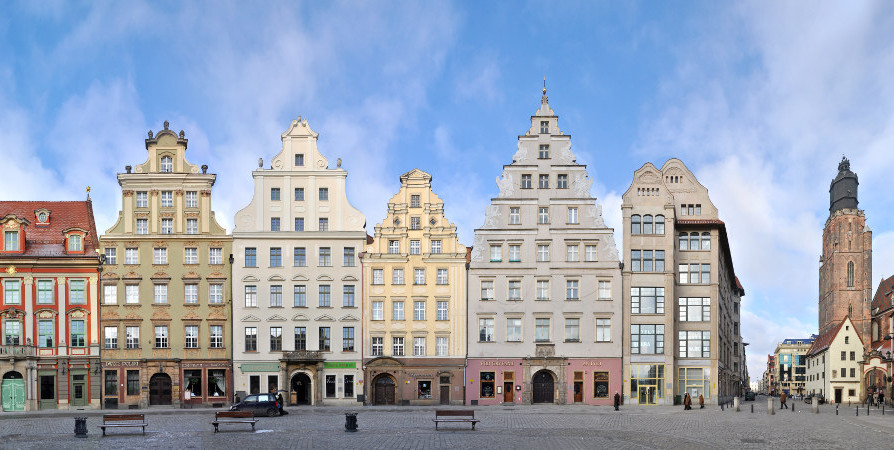 Next is the north side, known as Naschmarkt in German (pol. Strona Targu Łakoci) like the famous Vienna market. Most of these buildings are restorations, the most popular building here is The Golden Deer (german: Zum Goldenen Hirschen | pol. Pod Złotym Jeleniem) which is the light orange one near the right corner. The light pink one near the left corner hosts the most popular café of the city, the Café Cukiernia. 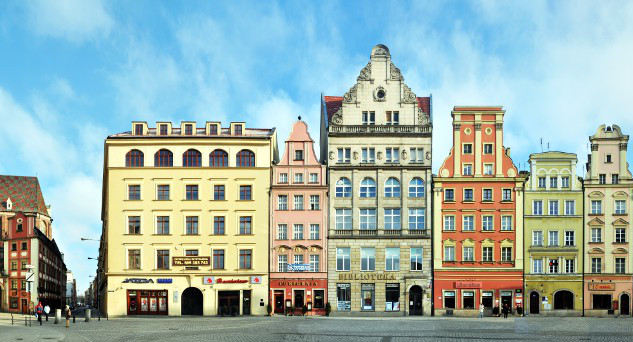 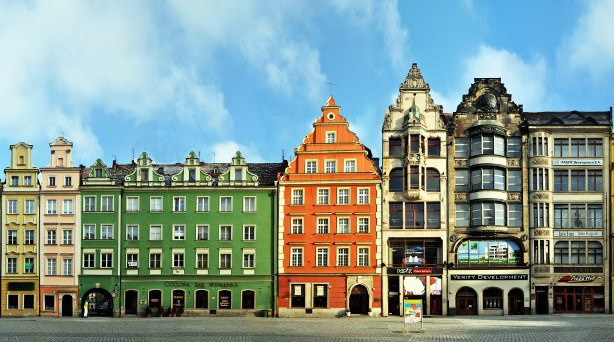 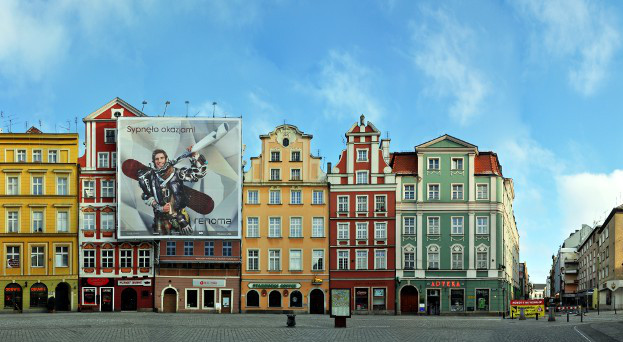 The east side is called the “Grüne Röhr Side” (pol. Strona Zielonej Trzciny) after a fountain which no longer exists and is the only side cut through by a street, the Kurzy Targ, which leads to the St. Mary Magdalene Church. The side is dominated by two large preserved Art Nouveau department store buildings, the house Louis Lewy by Leon Schlesinger (near left corner) and the former Warenhaus Gebrüder Barasch (next to the Kurzy Targ street). The red baroque style building on the left corner (The Golden Dog) was the last building to be restored in the early 1990s.

We complete the ring by walking along its south side, the “Golden Cup Side” (german: Goldene Becher Seite | pol. Strony Złotego Pucharu). Once again, this side was almost completely destroyed in WWII and most buildings here are restorations in either Classicism, Baroque or Renaissance style. The central building with three orange gables (No. 19) was called the Haus zum Galgen (House at the Gibbet), as once upon time the public place of execution was situated in front of it. The side is named after the scaffolded building on the left, it was once owned by the patrician family Becher (German word for cup) and there is a golden cup above the entrance.

Finally we turn towards the central block, the Tritt. This block was once occupied by the town hall and several large store houses for trade business. All of these had been torn down in the 19th century and now the block is occupied by the old town hall, the new town hall and three rows of Classical buildings with small alleys crossing.

The old town hall was originally built in the late 13th century and was repeatedly modified in the next centuries. Its exterior and facade were created in the Gothic style. Its cellar is still used by the 700 years old Schweidnitzer Keller beer restaurant (pol. Piwnica Świdnicka). 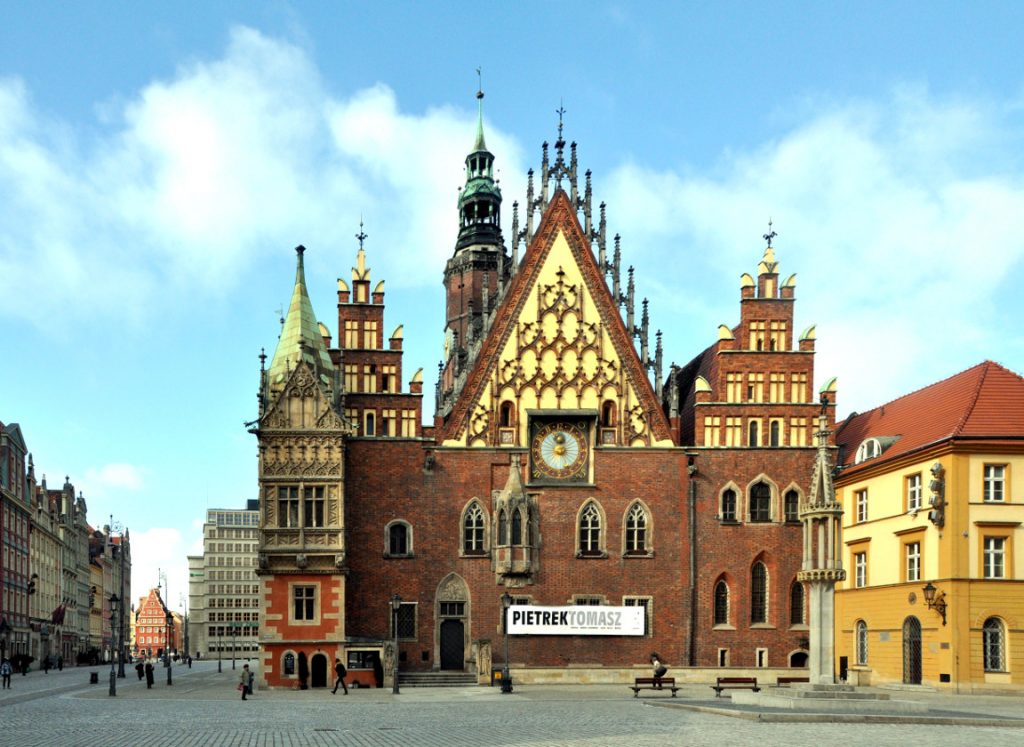 The new town hall was built in the 1860s after plans of Friedrich August Stüler. It was built on the site of the former Leinwandhaus, one of the old large store houses, and includes some ornaments of the former building. 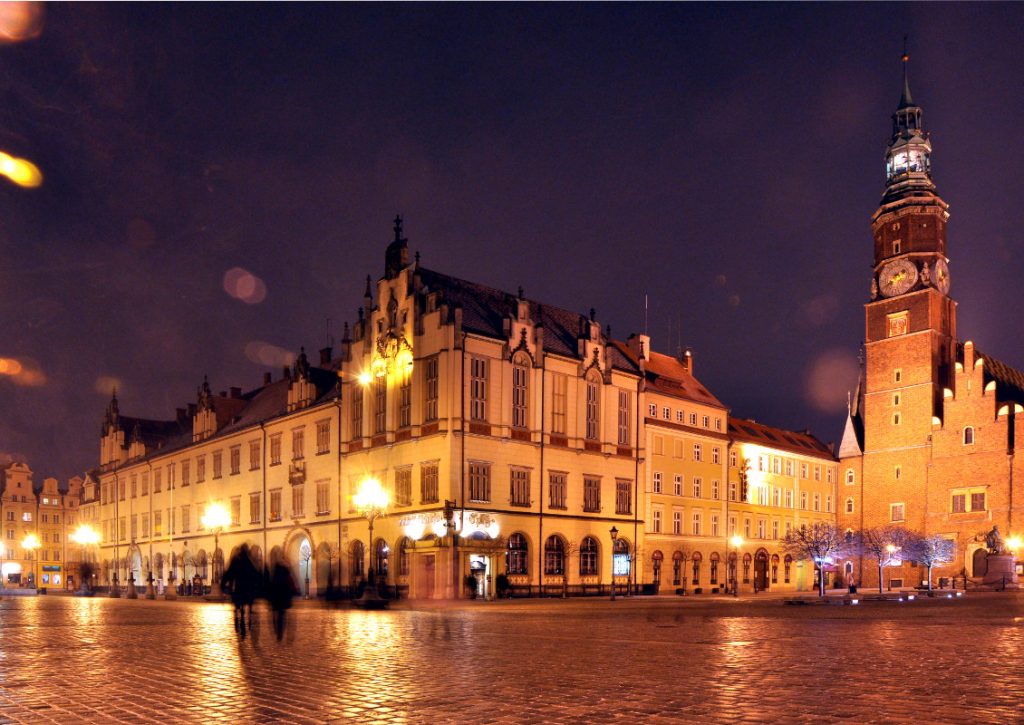 Finally you can also look for the famous Wroclaw dwarves, statuettes of little critters which are hiding all over the city. If you’re reading this in 2016 then you read up on the last events of the European Capital of culture program here. Or check out Urban Travel Blog’s Long Weekend guide to Wroclaw to plan a city break here in 2017… 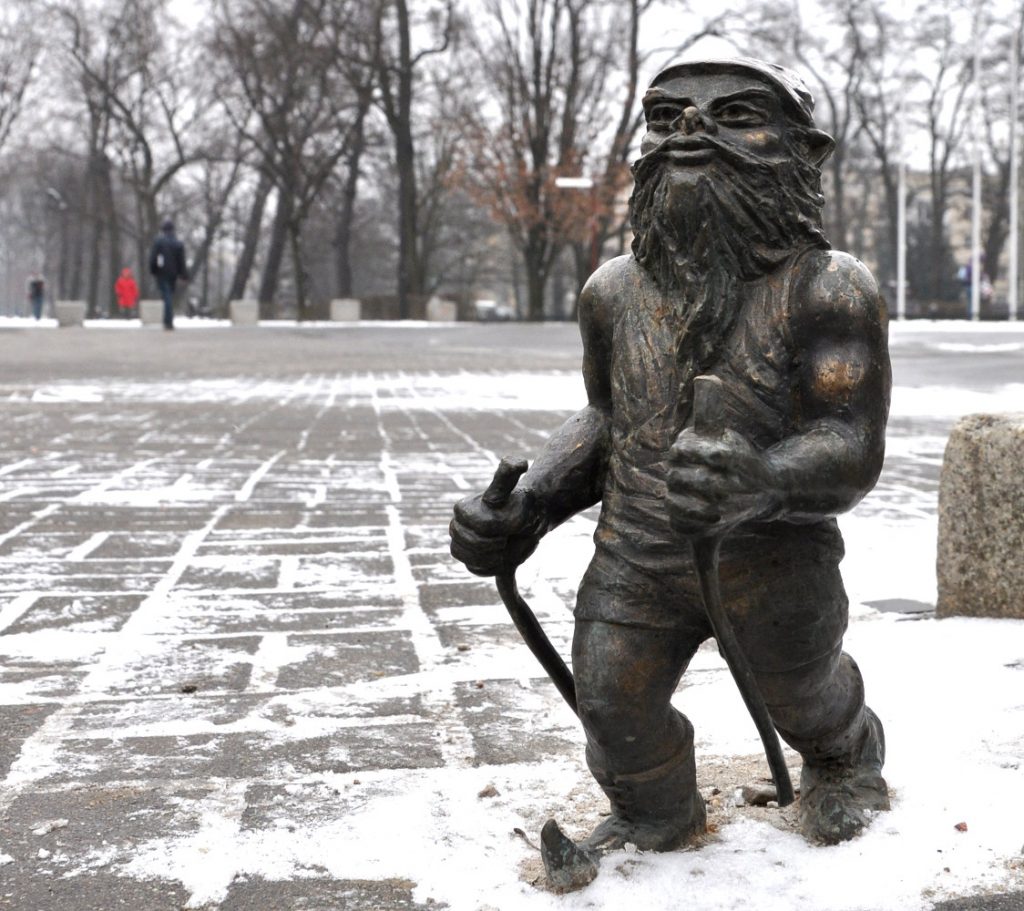 After studying Natural Sciences in London and Germany, Jörg stumbled into cityscape photography which in turn developed into panoramastreetline.com an online archive of linear streetscapes. More on Jörg.