Thought port was only for grandparents and Christmas? Think again. In Portugal, a wave of forward-thinking producers are championing both new wines – and new ways of enjoying of them. Duncan Rhodes reports.

After a hard morning’s grape picking I’m kicking back on a boat on the river Douro, admiring the valley’s craggy hills and striped, undulating vineyards as they roll by, and enjoying the sound of chattering workers toiling the land, as they drift over the water. With the October sun on my face, and a pink port cocktail in my hand, I’m getting that delightfully cosy “drunk-before-lunch” feeling.

Amazing to think that five years ago this simple pleasure would not have been possible.

Not because the Douro was undammed and dangerous back then. Or because the local river police were clamping down on reckless, cocktail-swigging, sailors. But more simply because pink port didn’t exist five years ago. In fact this brash newcomer on the port wine scene, with its intense berry-flavoured sweetness, has been the cause of much controversy here in the world’s oldest demarcated wine region, ever since Croft’s introduced it to the market in 2008. Many connoisseurs derided it – and continue to deride it – as alcoholic fruit juice, others claimed it was the dumbing down of a great and complex drink, whilst several producers were worried that it could spell the death of traditional vintage ruby and tawny ports. But not everyone has got the knives out for pink port. As we continue to cruise down the Douro – past the very spot where Portuguese national hero, Dona Antonia, famously capsized her vessel (her friend Baron Forrester drowned, but Dona Antonia’s billowing skirts formed a miraculous life jacket whisking her to safety… or so the legend goes) – I strike up a conversation with Oscar Quevedo, whose family launched their own pretty pink potion in 2009.

“It’s true that many producers that are still out of pink port, but more and more are converting. Before people were saying: is pink port going to kill port? Now they are thinking: is it going to bring a young generation of consumers and at least open their eyes to this wine? I don’t see it as complex and rich, something for a wine enthusiast – it’s not something that you can talk about for many hours, like with an old vintage port. No pink port is simple, it’s easy and accessible, it’s fresh, it’s adventurous, it has a beautiful sexy colour – so just take it as it is.”

Sexy and accessible. That’s certainly a powerful combination, and one that Oscar thinks is crucial in ensuring a bright future for Portugal’s national drink, which is in danger of falling out of fashion.

“I think we did very little in the last two decades, to promote port, to bring port to the younger generations. Very little in terms of education, very little in terms of innovation. When pink port arrived five years ago it was like fresh air coming to the market. We associate port with our grandparents and with the old generation. It’s probably not like that. There is room for everything. Probably we are not going to go to a disco and ask for a glass of vintage port… a cocktail of rose port is more in line with what people are drinking nowadays in a disco.”

Whilst even sweet-toothed drinkers may find a neat pink port a little too saccharine, in the right hands this bougainvillea-hued beverage is a lipsmacking foundation for a liquid concoction… and I’m lucky enough to be stuck on this particular boat with four or five pairs of those hands, in the forms of food and drink gurus Ryan Opaz, Robert McIntosh, Tara O’Leary, Manuel Cabral and Madeline Puckett. Oscar has challenged them to a cocktail mixing competition, and provided them with a crate of Quevedo pink and a decent smattering of ingredients with which to work their magic. Before you can say a cavalo dado não se olha los dentes all manner of tasty concoctions are circling around the boat, including Robert McIntosh’s prize-winning effort Pink Schist, and (my personal favourite) Madeline Puckett’s tangy Hot Pink Sting… made with 50% pink port, orange juice and zest, ice and a touch of honey. After excessive sampling of everybody’s efforts, I was not only tickled pink, but ready for a long siesta…

Back in the urban environs of Porto and I want to see what the young Tripeiros (literally “Tripe-eaters”, the nickname given to Porto residents) are drinking on an average night out – and whether their attitudes to port wine are changing. I’ve been told I have to check out Porto Tonico, a new bar which opened in July 2012 in the heart of the city’s student nightlife district, which has already making waves on the scene. Even though its nearly 2am by the time I’m ready to hit the tiles (I was delayed by a seemingly endless train of amuse-bouches at the excellent Yeatman Hotel restaurant), the downtown area is very much alive with people milling around, bar hopping and chatting away on the streets. After stopping for directions a couple of times (I’d thoughtfully left my hotel without a map) I manage to locate the bar, its name stencilled in gold on a classic Portuguese door. A cream coloured sofa extends along one wall, a fabric-tiled bar occupies the other, and at the back a dancefloor opens up replete with DJ gallery and humungous glitter ball.

“We specialise in port cocktails,” explains the young bartender when I ask about the ethos of the place. “We make our own caipirinhas and mojitos with port instead of rum. We have white, tawny and ruby port cocktails and we experimenting with rose port now – we should have them next week.”

A quick glance at the menu reveals such exotic sounding delights as Porto Fizz, made with Offley white, sugar, lime juice and soda (6 euros), and Porto Sunset, made with Offley tawny, orange, cinnamon, and sugar (7 euros). But as a resident of Barcelona I have to check out their “Mojiporto”, to see if it’s up to scratch. I’m pleasantly surprised. The port gives it an additional sweetness and complexity, but it’s not too cloying and the basic taste structures, with the herbal, slightly bitter, mint flavour contrasting with the sweet liquid, remain the same.

As most of the punters at P.T. have elected to sit outside on the street terrace – it’s still just about warm enough to do so – I do the same. Spying a fellow cocktail drinker I go over and introduce myself. It turns out that Gabriella is drinking a port tonic, the bar’s eponymous drink, simply a gin and tonic with port instead of gin. I ask if I can have a little taste – for research purposes – and she makes a friend for life by going to fetch me a new drink of my own. It turns out she works here, and soon she introduces me to Camil, a Portuguese native of Indian ancestry who manages the bar. We pull up a seat, sip on our port tonics and I ask Camil about his perception of the local drinking habits. 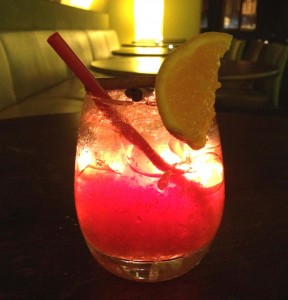 “Port is not consumed very much on its own by the young people in Portugal – it’s not a habit. It’s more common to see people outside Portugal drinking it in my experience. Port tonic though is a very fashionable drink now. It’s not new, but it’s newly fashionable. It’s more of a aperitif, and quite trendy now. Here in Porto Tonico we are also adapting cocktails using port as a base. We’ve organised seminars for people specialised in mixology to help us develop cocktails for port wine. This has been something new, which the Portguese young crowd are adapting to and enjoying.”

Judging by the ease with which both the port mojito and port tonic have flown down my gullet, the country’s port producers could really be onto something here. By finding new ways to enjoy port wine they are encouraging the Portuguese to support their national drink, whilst adapting it to current drinking habits, and opening up exciting new opportunities for innovation. From what I experienced in Porto and Portugal, it seems like this is a trend very much in its nascent stages. But with producers pouring (pun intended) so much energy into popularising both pink and white port cocktails (indeed Porto Tonico bar is backed by the Offley brand), it might just be that those tasty beverages we mixed back on the Douro are soon established staples of self-respecting cocktail bars the world over.

Duncan travelled to Porto and the Douro Valley as part of the Douro12 trip, organised by IDVP and Catavino Wine Blog. As a footnote he also recommends you try out the palatable Quinta do Tedo’s pink port on top of those tipples mentioned in the article.