Cool Things To Do in Rio de Janeiro

Stuck for things to do in Rio? After three weeks of experiencing every aspect of the city, our itinerant Editor has a few suggestions on how best to experience Brazil’s culture and nightlife capital.

Rio is definitely a party town, especially in summer and during Carnaval season… but surprise surprise, I did manage to do one or two things that didn’t involve pumping my bloodstream full of cachaça during my three week stay. I’ve already described exploring the Lapa district and ascending Sugarloaf mountain in my first post of this “On The Road” series, followed by how I opted to spend two weeks learning Portuguese in my second post, before describing the pre-Carnival pandemonium in my last post… so to round up my Rio adventures, here are some of the coolest things to do in the city of Samba that I just didn’t get around to mentioning yet.

Most of Rio’s favelas have been “pacified” now… which as far as I can tell means a whole lot of military policemen stormed the district and shot the place, and the people, up. Controversial to say the least, but go research if you’re interested as I will steer clear of politics on this blog. The result at least is that most favelas can now be visited safely, and in fact “favela tours” have become a fashionable choice for backpackers and more intrepid tourists with most Rio hostels offering a guided package. (I should probably note that several travellers I spoke to don’t agree with this type of tourism, saying that it turns poverty into an attraction and that it doesn’t give back much to the community. I didn’t feel those points were necessarily true or relevant, plus I felt it was a great opportunity to learn something about these much maligned districts – and their inhabitants). Anyhow, I chose to take a tour of the Cantagalo district, offered by my language school… which I regretted the moment I realised that it was in Portuguese and therefore I was going to miss a lot of salient details. Nonetheless the die was cast and we set off from the wealth of downtown Ipanema to the steep hillside of the slum that sits above it.

It seemed our guide was well known to the locals there and the Brazilian handslap/fist bump was exchanged with the shirtless ghetto kids milling about on the favela outskirts. I did the same. We were in.

The steep narrow alleys of the favela made it a bit intimidating, and we were told several times not to take photos, especially of people, but in fact the residents themselves paid us little attention, and when they did it was usually to give us a cheerful greeting. At the risk of seeming patronising, the locals on the whole seemed a pretty happy bunch and this was far from a misery tour as far as I was concerned. The houses were sturdy concrete huts, jumbled on top of each other or propped up on thick concrete columns up the hillside, and whereas there was little in the way of stores or industry (as you might expect), there were a few bars and corner shops, and one very nice bar indeed where we had the cheapest buffet lunch I’ve ever had (about 4 reias, or 1 GBP, for a small plate) and great views over the ghetto rooftops and out to sea. From here I noticed that every house at least was hooked up with satellite TV… although something tells me not 100% illegally. Similarly, electricity and water are siphoned off the system, although the residents are legally registered and elegible for state benefits (on offshoot of that is that the girls get pregnant very young to receive their stipend from the government).

I wish I had taken an English language tour, because I’m sure I would have learned a whole lot more, but definitely anyone interested in the history of Rio and the socio-economic challenges facing Brazil should take a favela tour in my opinion…

Not to be confused with Pao de Azucar (“Sugarloaf”) mountain, Corcovado (“Hunchback”) mountain is the hill that acts as pedestal for the world famous Cristo Redentor statue. I don’t think I need to say too much about this massively popular tourist attraction, but safe to say it’s well worth the trouble of taking the train up to the viewing platform that spreads out directly below Christ’s outstretched arms. You need to take the metro to Largo do Machado, then a connecting bus to Corcovado’s own little train station at the foot of the mountain. Tickets are 50 reias return. More visitor info on the official site. You can also hike it, or so I heard, but apparently it’s a fairly tough three hour hike, with some dicey moments, so you may prefer to take the lazy tourist option… works for me every time.

If you’re in town for a bit longer and want to learn some samba, I’d recommend researching a school. I attended a weekly beginners’ lesson organised by Casa do Caminho language school, and whereas none of the city’s celebrated troops have since invited me to join their parade in 2015, it was fun to attempt some of the basic steps and would probably only take a few lessons to make a passable go at it. Forro is the other major dance you find at Rio’s nightclubs, and if you’re struggling for motivation then safe to say a few lessons in this more intimate version of salsa will definitely stand you in good stead with the opposite sex.

Right at the southern point of the Copacabana district, this military base extends out on a pleasant headland with fantastic views back on Copacabana’s almost endless stretch of sand. There’s not too much to do here, although it’s fun to mosey around in the fort’s interior, and then climb on top and check out the guns. But the vibe is pleasant and there are two or three reasonably priced cafe/restaurants whose tables stretch out under a shaded canopy of foliage right next to the sea, where you can enjoy the aforementioned vistas back across the city. In short a great place for lunch. Careful though, the fort costs a whopping 4 reias to enter: official website here.

Whilst sun worshippers might find it hard to tear themselves away from the thong-and-sunga-packed sands of Ipanema, on the other side of the district is one of the city’s most beautiful areas, the Lagoa Rodrigo de Freitas. This huge lake is largely ignored by residents, which is a pity as it has a great biking path where you can jog, cycle or skate, whilst if you want to go out on the water you can hire a pedalo. The area could do with a bit more development… annoyingly there’s a private sports club on the one island that would make a perfect public park and beach… but it’s definitely worth visiting. Behind the lake you’ll also find the attractive Botanical Gardens, and the Parque Lage, the latter of which houses a Visual Arts School in a lovely 1920s mansion, where hipsters like to take breakfast. It also has one of the world’s lamest aquariums, which I quite liked.

Get High On Juice

Nowhere does fruit juice quite like Brazil, and whether it’s passion fruit or the iced acai berries of Amazonia you’ll find plenty of exotic flavours for sale at specialist, and non-specialist bars around town. Although hardly great for your stomach (you might want to limit your intake, especially if you’re staying in a shared-room dorm and bathroom), they do have plenty of real – and purported – health properties. Keep an eye out for contrived concoctions promising you the strength of ten jaguars, the alertness of a clairvoyant river dolphin, the stealth of an anaconda with a 7th dan black belt in ninjitsu or the sexual prowess of a capybara who’s just got back to Brazil after getting a PHD in tantric sex from Bombay University… 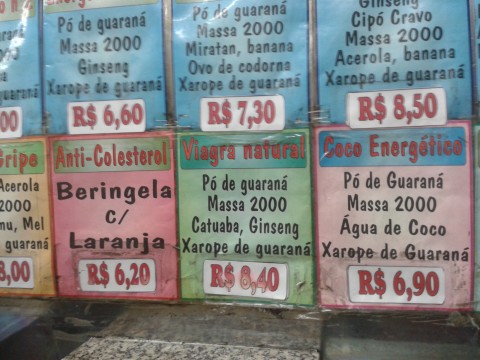 Nightlife in Rio is of course not confined to Carnaval parties and drinking cut-price caipis in Lapa. So good we went twice, Rio Scenarium instantly propelled itself into my hallowed list of favourite clubs in the world, with its zany decor, sprawling layout and authentic Brazilian party vibe. Bikes hang from the ceilings, stained glass windows cast coloured light across the wooden floors and obscure artwork and antiques decorate almost every square inch of wall space. Downstairs live bands regale the crowds with samba and other genres of local ethnic music I don’t really ‘get’ (but still manage to enjoy)… whilst upstairs things are a little funkier, and DJs mix in new electronic sounds with traditional Brazilian beats. In fact at one point, on our second visit, the tracks upstairs were so happening that the spirit of Justin Timberlake took over my dancing feet (as it is wont to do on such occasions) and I treated the stunned crowds of the Rio Scenarium to a shimmying spectacle of captivating footwork that transcended art and became the pure representation of beauty on Earth. Or so I imagined, as I channelled the running man and the moonwalk – combined with several very strong mojitos – into a ‘unique’ performance. My only regret is that I couldn’t dance it, and see it, at the same time.

Also worth checking out from a nightlife perspective is the favela of Vidigal. This is one hip slum, just past the chi chi districts of Ipanema and Leblon. It was my last weekend in Rio when we taxi-ed over for a Digital Dubs party in a three-storey shell of a building which reminded me of a disused apartment block in Berlin I once went to a rave in… except this was much smaller. Despite the rain soaking us on the way in (the taxi dropped us at the bottom of the hill) and continuing to pour down, making the rooftop terrace out of bounds for much of the night, this was probably my fave party in Rio. Real hip hop music, beautiful and friendly people, a suitably shady venue and a cheap bar… what more could you ask for? Well a little more room for my moves would have been nice, but there you go. The spirit of Justin Timberlake got a well deserved break that night.

Check back to UTB soon as I fly north to Recife to experience Carnaval proper! Oh yeah, it’s a big one!

Posted in On The Road with destination tags Brazil, Rio de Janeiro

2 thoughts on “Cool Things To Do in Rio de Janeiro”