Ho Chi Minh City may not be the first choice for many travellers to slow it down and unwind, but as Vince feels the effects of his Asian Odyssey catching up on him he decides to take it easy in the former capital of Saigon.

“We’ll spend a few nights in Ho Chi Minh and figure it out from there.”

Nine days later, we’re leaving Vietnam – from Ho Chi Minh City, having only left to visit the nearby Mekong Delta. It’s one of the debacles of extended travel, especially in South East Asia: there’s so much to see, so many cities, countries to go to, incredible sights to see… But I’m tired. Tired of traveling every third day. Tired of rushing to see this or visit that. Am I traveling to sightsee or to experience? Definitely both to a certain extent; sometimes you just gotta slow it down though. 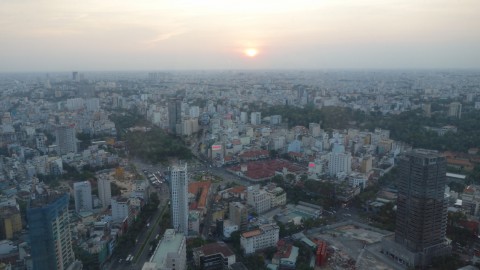 Ho Chi Minh City (formerly, and more romantically, Saigon) is not the place to “slow it down” in the sense of tranquil relaxation. Saigon is a city in all the ways that are both discomforting and inspiring about urban centers. The traffic, noise, smog, and heat that are ubiquitous in much of South East Asia have been perfected here. But the energy, the food, the activity, the community are equally inescapable. There’s something about city life that is in my nature, not to mention in my job description as a correspondent for Urban Travel Blog, right?!

The streets of Saigon are overflowing with throngs of motorbikes moving in a seemingly lawless flood resembling some sort of apocalyptic exodus. I think that “Keep Calm and Carry On” quote may have been a result of an attempted street crossing in Vietnam. With such terrifying traffic conditions, the decision was quite obvious: we have to rent motorbikes. At a steep $4-a-day, we got our wheels the day after we arrived and they kept us mobile for our entire stay in Vietnam (even hauled us to Mekong). Surprisingly, once you’re in it, the flow of traffic is (relatively) sensible, and all of those hours playing Mario Kart finally reaped tangible, even life-saving benefits (I told you mom!). If you’ve ever been a bull during the running of the bulls in Pamplona, you kind of get the idea (if you’ve ever been a bull and you’re reading this – e-mail me and let’s get you a book deal). 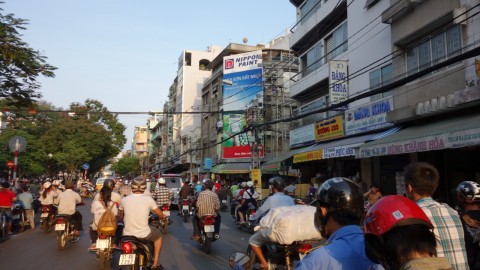 The Pham Ngu Lao area in District 1 is the main area for travelers, but it’s not quite as overrun as Khao San Road in Bangkok, and generally feels a little grittier than a lot of roads oft-traveled. The beer is cheap, the crappy souvenirs and sunglasses are aplenty, and the touristy restaurants cater to exactly what you’ve been craving as a traveler abroad so that, whilst you feel ashamed for going to them, you just can’t help yourself. They’ve also figured out that it’s fun to drink really cheap beer and sit on the street in plastic chairs that are meant to be used in a kindergarten classroom. Okay… That’s all off my chest now.

After I’d gotten my fill of American breakfast, I did manage to get out and around, exploring the city and getting my hands (and mouth) on some delicious Vietnamese food. I have a favorite Phở restaurant in LA, so I was on the lookout for a place that could outdo it. Fortunately phở is everywhere and extremely cheap, so I was able to rack up several great tastings, none of which, I’m proud to say, completely puts Phở So 1 in (my hometown of) Van Nuys to shame. Bánh xèo, essentially a Vietnamese crepe, filled with shrimp, sprouts, and diced green onion became my staple breakfast on the street or at food markets. Additionally, due to the history of French involvement in the area, delicious bakeries are found on nearly every block, maybe the only positive hold-over from an era of colonialism. 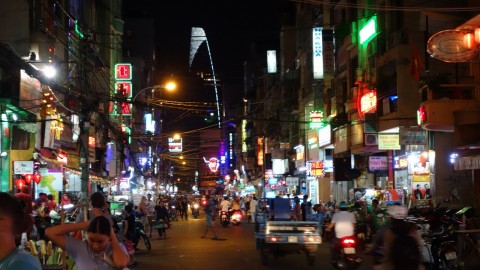 Speaking of foreign involvement in Vietnam, the War Remnants Museum is a difficult but necessary visit while in Ho Chi Minh City. As an American it’s strange to confront the atrocious reality of a war not so far in the past. Without delving into the political quagmire of US foreign policy (then or now), it’s undeniably tragic to sift through the pictures, stories, and details of such a devastating event in our collective history. The museum was a depressing experience for me, but I think an important one, and I would highly recommend spending some time there.

Other attractions to check out on the “tourist-circuit” are the Reunification Palace, the Central Post Office, and the mini Notre Dame Cathedral. None of these are particularly spectacular, but they are all really close to each other and give you a sense of the city’s unique history. More interesting, in my opinion, are the markets like Chợ Bến Thành and Chợ Bình Tây that are brimming with vendors selling just about everything you can imagine. Whether you’re looking for (bizarre) food, clothes, spices, gifts, or just something to do, you can easily get lost and spend an afternoon at any of the multitude of markets throughout the city. 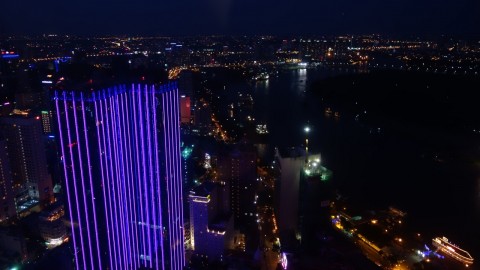 You can only drink shitty beer on plastic kindergarten chairs for so many nights in a row, so one evening we headed to the Bitexco Financial Tower to have some drinks at the bar, Alto, on the 52nd floor. Every now and then it’s nice to class it up, and when expensive drinks are still sub-$5, it’s a no-brainer. The view of the sunset from the tower was really beautiful and the bar was great. Definitely recommend checking it out if you’re in HCMC.

Oh, and because I know you were wondering: YES “On The Road” did get on the court and play some tennis in Saigon. Sorry for making you hold your breath till the end on that one. 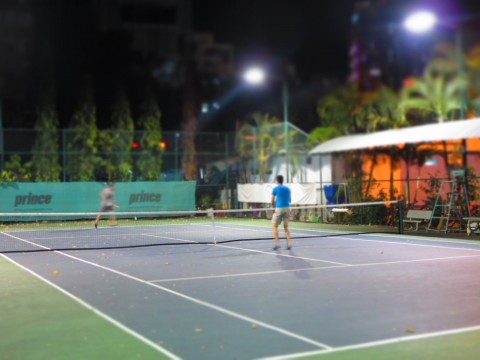 Your first ever On The Road post? Catch up with all of Vince’s adventures (and games of tennis) since he left Los Angeles, starting with pre-journey thoughts in Chicago, his adventures in India – including visiting Mumbia and Goa, a journey to the Hampi ruins and several days in New Delhi, plus of course a day trip to the Taj Mahal – and his uncovering of the good sides of Bangkok. Next stops Singapore and Kuala Lumpur.

Posted in On The Road with destination tags Ho Chi Minh City, Vietnam

One thought on “The Slow Life in Ho Chi Minh City”