On The Road: Taipei’s Jurassic Gondolas and Dumpling Gods

Vince‘s journey takes him to Taipei where he explores the night markets, climbs Taipei 101 and takes a cable car ride into the misty mountains… refreshment comes in the form of coffee, teas and dumplings.

Remember the feeling I mentioned when I first arrived in Bangkok? Finally, back in an urban environment; the modern infrastructure of Thailand was such a contrast to the few weeks that I had spent in India. I felt similar when I transitioned from almost two weeks in the Philippines to landing in Taiwan. The “Wild West” vibe that I used to describe the Philippines was starkly contrasted by the clean, organized, modernness of Taipei (not to mention the much-welcomed cooler weather) Taipei has the distinct apparentness of Chinese culture, but due to its unique history of Chinese/Japanese occupation, it has an interesting influence of Japanese sensibilities in regards to urban planning, organization, transportation and technology. Taiwan’s history, especially politically speaking, is really fascinating and Taipei has some beautiful architectural monuments that chronicle its heritage, like the Chiang-kai Shek Memorial, the National Theater and Concert Hall, and Longshan Temple to name a few.

Upon first arriving in Taipei we stayed in a small hotel that happened to be one block away from a night market called Linjian. Night markets are a popular activity in Taipei, and we checked out a more famous one called Shihlin Night Market, but to be honest I preferred Linjian. It’s a small street jam-packed with vendors selling everything you can imagine, including (and most importantly) all kinds of awesome snacks, fresh foods, and desserts. The night markets are definitely a popular tourist destination, but seemingly also cater heavily to locals. We ended up cruising through Linjian almost nightly whether it was for dinner or to buy some shoes (remember what happened in Boracay?). Any of the night markets make for an awesome few hours to begin a night out, not to mention the canopy of lights and lanterns overhead casts a romantic glow on the scene – date night, gents? 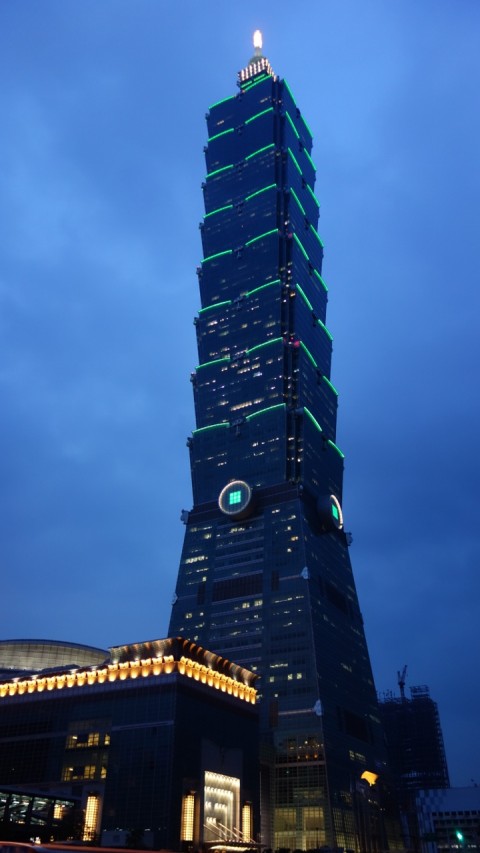 One of the most famous landmarks on the island is Taipei 101, which is the second tallest building in the world. This iconic tower is far from just a damn-tall hunk of steel, the architecture is actually quite remarkable; it’s designed to invoke certain traditional Chinese elements, such as a stalk of bamboo and an Asian pagoda, as well as represent the evolution of modern technology. Also, because of its height, the tower is visible from most of Taipei, providing a useful landmark for the directionally challenged. You better believe we forked up the $15 to check out the view from the top of that bad boy, including the outdoor observation deck. I totally don’t have a fear of heights… At all… I swear. Although the weather wasn’t very clear, the view from the top was really beautiful, and they have a free audio tour that takes you around different viewpoints, sharing some interesting anecdotes and historical facts about Taipei (sounds lame, but it was actually pretty cool!).

Gone With The Gondolas

As you, oh faithful reader, may already know, I’m a big fan of public transportation. Taipei had a wonderfully organized and extensive metro system that was helpful in aiding the exploration of the city. Most notably though, was its Maokong Gondola extension which services the surrounding mountains. I can’t stress enough that you must ride this thing if you visit Taipei; it was one of the highlights of my entire trip.

After exiting the metro at the Taipei Zoo station, we walked a few minutes to the gondola station which is a part of the metro system (so it only costs like two bucks!) and hopped on board what ended up being a surprisingly long and beautiful ride up into the mountains. As we rose higher and higher into the mountains, a sea of lush green below looked as though it was straight out of Jurassic Park (the slight drizzle might have added to the effect). The views from the peaceful ride were stunning, you can even catch Taipei 101 off in the distance. My two friends and I shared the gondola with a super-adorable Taiwanese father-daughter combo that were the cherry on top of what was already an excellent experience..

But it gets better…

Once you reach the Maokong station at the top, there is a road that branches off with mini-bus services that will take you around the area, but we ventured off on foot instead. The road led us to what is possibly the coolest place to get a cup of coffee in the world. We came across this little coffee-truck on the side of the road that overlooked the gorgeous mountains below; if I could get my morning coffee there every day of my life I would be a happier individual. It was one of those experiences that’s hard to describe to someone or write about, just wonderful to enjoy.

Continuing on the path we came across Tianen Temple and the Tea Promotion Center where they let us sample some of the local teas (the area is known for its production of some of the finest Taiwanese teas).

The road also branches off into several footpaths that explore the gorgeous hillsides which really take the Jurassic Park analogy to another level. We ended up getting a little bit lost, and, once we found the road again, stopped at a tiny restaurant for a beer as dusk was approaching. After some google translating with the waiter we were able to discern that we could hop on a bus back down to the Taipei Zoo station and did so just before nightfall, capping off what turned out to be one of the most memorable days of the entire 10 week trip.

Holy sweet mother of dumplings that place is fantastic. Din Tai Fung is a world-famous, Michelin-starred dumpling house that originated in Taiwan and, although you can find them in many countries across the world, experiencing its greatness in Taipei is a beautiful thing. Aside from their dumplings, which are far and away the best I’ve ever had, they also serve up excellent rice & noodle dishes, buns, and soups. DTF is absolutely a must if you’re visiting Taiwan. I was, in general, delighted by the food in Taipei; whether it was a night market, a food court, a random road-side restaurant, or just the carts and stands selling delicious baked goods, desserts, and beverages on the street, I regularly was met with deliciousness.

Taipei seems like a nice place to live. It feels to me as though Taiwan has its own very unique cultural identity that is certainly something to be proud of. Taipei strikes an impressive balance between the infrastructural modernity of an ultra-city like Singapore or Tokyo, while retaining that wonderfully alive Chinese heritage that manifests in beautiful art, architecture, food, and lifestyle. I look forward to spending more time in mainland China, Japan, and other countries in that part of the world, but I think that Taiwan will always have a special draw about it.

Bit slow on the draw? Get in your Tardis then and travel back in time with Vince to other great Asian capitals, such as New Delhi, Kuala Lumpur, and Bangkok, Thailand.

Posted in On The Road with destination tags Taipei, Taiwan

One thought on “On The Road: Taipei’s Jurassic Gondolas and Dumpling Gods”