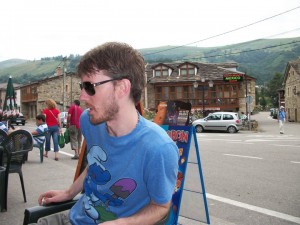 Andrew Matthews is a British travel writer, born and raised in South Africa. From rural beginnings growing up on a farm surrounded by “the Highveld”, he travelled extensively throughout Africa learning the importance of local communities and how tourism can be an incredibly positive influence on so many lives.

He moved to London and there developed a serious case of the well documented and hopelessly incurable “travel bug”, while his keeping of a travel diary (no you can’t read it) led to a degree in advertising and journalism. He has since run with bulls in Pamplona, been in the world’s biggest food fight, mixed cocktails in the Algarve, learned how to spot Thai ladyboys, played volleyball with Burmese villagers (it was Burma at the time), lived aboard multi-million pound yachts in the Maldives and hiked extensively through rainforests and over mountain ranges.

After struggling with a severe follow-up case of “wanderlust”, Andrew now works as writer and travel expert for holiday rentals company HouseTrip, and his condition has been labelled terminal.