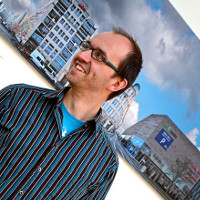 With no formal training, Jörg stumbled into cityscape photography while developing ways to edit sets of images into linear panoramic views of complete street fronts and the like. This developed into panoramastreetline.com an online archive of linear streetscapes which by now includes more than 20 countries and images from cities as diverse as Amsterdam, Puebla, Madrid, Berlin, London, Prague, Copenhagen, Hong Kong or Antwerp. (In August 2015 he launched a two year long blog project 101cityscapes.com celebrating one city each week). Travelling to several cities each year, he not only documents today’s European cityscapes, but also learns and writes about these urban spaces.

Originally he studied natural sciences in Germany and London, but gradually moved away from that to start working for museums, online mags, radio, an online campaign and an online t-shirt platform, before launching his own online project. His most ambitious photographic project so far has been an all-in-one-image panorama of the 3.5 km long Leipziger Ring which was exhibited during the 1000 years anniversary of Leipzig in early 2015.