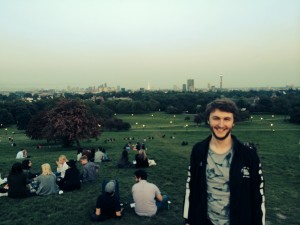 Josh Ferry Woodard is a freelance writer based in North London. He writes about foreign exchange for a living and is often featured in the expat edition of the Telegraph. But his true passion lies with travel and he has recently launched a travel blog. It’s called the Tiny Traveller and it’s written from the perspective of a 3D-printed mini-clone of himself.

He first realised the supreme excitement of travel when he found himself stranded in Riga due to the Icelandic ash cloud of 2010. A 24-hour bus ride to Berlin, two crazy nights in the German capital, a badly budgeted hired car to Holland, a week in Amsterdam culminating in Queen’s Day and an overpriced flight back to Bristol later and he was hooked.

He spends a lot of time exploring London’s thriving pop-up scene and has tasted most of the city’s tastiest coffees. He blogs about London for Spotted By Locals and tweets for himself here.

Check out our full team of travel bloggers here.