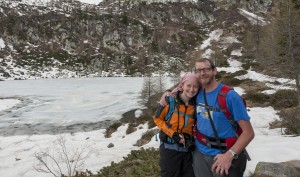 Margherita Ragg and Nick Burns are a writer from Italy and a photographer from Australia. They are also husband and wife. After meeting in the dusty corners of a London food market where they both worked, they decided to ditch their aprons for camera and notepad and bought a one-way ticket to South America. Fifteen months and three near-death experiences later, they landed in Milan and decided to call it home. For a while, at least.

They are the creators of The Crowded Planet, a travel blog featuring a different destination each month, with a focus on adventure, cultural travel and photography.

Margherita writes about adventure and cultural travel and was runner-up to the 2012 Guardian Travel Writer of the year competition. Nick specialises in wildlife, nature and travel photography. His photos have been published on a variety of newspapers and magazines including the Guardian and the Wall Street Journal. Check out  his website Ragg Burns Imaging and flickr account.

Their other passions, in no particular order, are: mountain trekking, rock climbing, cross-country skiing, homebrewing, liqueur-making and their cat Tappo.