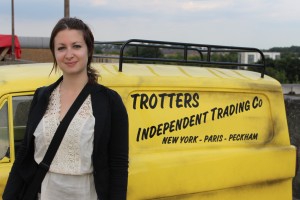 Sasha Arms is a London-based writer and editor who travels and writes extensively for a number of publications and media outlets.

The editor and author for city guide publisher, Carl Goes, Sasha helped to develop the concept for the new travel guide brand for curious and creative people, which includes insider interviews, tips from local city residents and information about working while travelling. The first city guide, Carl Goes Berlin, was published in 2015. Sasha is also the Co-Editor of Asian Story by MvHotels, an in-flight magazine publisher serving multiple airlines flying into the Maldives. Sasha was previously the Editor of Foodie Magazine London, the Editorial Director of Futurespace magazine and a Lonely Planet contributor. As well as being a contributor to Urban Travel Blog, Sasha writes for Fly.com, FOUR Magazine and a number of other websites. Sasha also spent a year as a reporter for a weekly newspaper in Honduras, covering issues such as the state of Honduran prisons and rural projects tackling child malnutrition, as well as interviewing high-ranking public figures. When not writing for other media, Sasha also writes for and edits her globally-focused food blog, Hungry Nomad.

Meanwhile check out her contributions to UTB below: